Okay, so Ill start by saying hi, and this is my first time posting here. I'm not the most tech savy person around, but can sometimes figure things out, so any help is appreciated.

I guess the question is, has anyone experienced this or have an idea of a way I can combat this problem? I'm almost certain I set the linksys up correctly to act as a wireless access point. I just don't understand why when the box is connected to it and the uverse is turned on and being watched the internet instantly cuts out. Thanks for any help.

P.S. I have seen some configuration like using the RG just as a modem and then I can set up two routers to do what I'm looking for or setting the liksys up in a different IP such as 192.168.2.x, but I rather not do either of those. Again I'm not that tech savy, so bear with me.

The problem is once the multicast TV traffic/packets are coming across the cable to the switch it floods the switch with so much data it won't work for internet.  In other words it can't process all of the data for the TV and internet at the smae time.

You could get rid of the Linksys WAP and use something like this.  They just plug into an electrical outlet to extend your signal.  It would receive the signal from the RG then send it on so it would be like have another RG at the other end of the house. 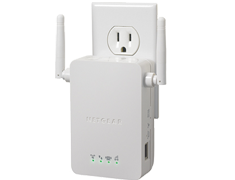 If I'm not correct someone else will come along and correct me I'm sure!!

Thank you for the response, and that is good to know. The thing is, even when I don't even have the AP (for the wireless box) powered on at all, and the wireless ATT box is hardwired to the  linksys WAP swtich, it still kills the internet at the switch, both wired or wireless (TV works fine).

Like I said, I don't know too much. But I just assumed the att box gets assigned an ip address even going through the swtich and wouldn't need the bandwidtch of a full cat 5e line. (considereing the router they gave me doesn't even support gigabit 🙂   ) Unless the RG router and box have some weird thing were they need a dedicated line and thats why the interenet won't work?!

I called att and they put me through to Connect Tech, and I brieftly explained my issue. The guy had to ask his supervisor, then came back and said they could help me fix it for 49.99. I just can't justify paying that, plus the guy didn't really seem like he understood my explanation of whats wrong. So before I even consider that, I just want to make sure a 3rd party WAP/ethernet will support interenet with a uverse box attached playing video simultaneouly.

The input to the Linksys must be the  WAN, not the WAP port and follow the following directions from Computer Joe:


I set the "internal" router to assign addresses to "my" side of the network in a different IP range than what the RG uses (192.168.2.* instead of 192.168.1.*) but using the same subnet mask (255.255.255.0). My internet works fine with no interuptions and local network tasks (back ups, streaming, etc.) work as expected. I can also still access the RG from "my" side of the network when I need to without having to change any network settings or swap any cables. Leave DHCP running on the RG. You do not need to disable the firewall in the RG as the DMZ will open a pinhole through it to the address you pick (your internal router). If you have existing wireless on your router that your satisfied with and want to keep, just make sure to turn off the wireless in the RG.


As for the STBs they should be run straight out of the RG with CAT5 or RG6 Coax.

Please NO SD stretch-o-vision or 480 SD HD Channels
Need Help? 1-800-288-2020, After he gets acct info, press # a bunch of times, get a menu from Mr. Voice recognition
Your Results May Vary, In My Humble Opinion
I Call It Like I See It, Simply a U-verse user, nothing more

Thank you to both of you for the help. The answer I was looking for was that the STB must be directly connected to the RG on a dedicated cat5 line. I think this is the reason why when I connect the STB to my wireless access (linksys) switch it prevents all other internet connections (when the STB is turned on).

And I understand I can use WAN port on the linksys and use DCHP on the linksys in this configuration if I set it to a different IP subset such as 192.168.2.x, but I rather have the RG deal with all the IPs. So I just have the linksys acting as a WAP. Unless there is a better reason for that type of setup, the internet works fine on the linksys WAP now as long as the STB isn't attached to the linksys wireless access switch.

Yes, I was saying that I have a linksys acting as a WAP connected to the RG and internet works great wired and wireless on the linksys. Now when I attach the AP for the STB or the STB directly to the linksys, and turn the STB on, it stops all device's internet attached to the linksys. And then when I turn the STB off again, all internet on the liksys WAP resumes fine. I guess this makes sense as to both of you guys said I need the AP and/or STBs directly connected to the RG.

I guess I just have one final question. Why is it not possible to connect the STB or the AP for the STB to a switch on the network, like the technical reason? I only ask this because on the far side of the house I don't get wireless access from the RG. I only have one cat5 line running to that side of the house, which is where I placed my linksys WAP to supposedly provide internet and the ability to hook up an STB. So because the STB needs a dedicated line, that means I have to choose wether I want internet or the STB to work on that side of the house through the linksys WAP. I would think there has to be some type of solution to this problem other than running two cat5e, where one would be attached to the WAP and the other to the STB (I would but running the first line was a nightmare with the way the house is set up, requiring drywall removal in multiple places and crawling between floors in a 2.5ft area 🙂 ).

Yep, that's what I was looking for. I guess they expect there little wireless APs for the STPs or coax to work for all the Boxes throughout someone's house. I'm surprised they don't have a better solution considering the little AP is rated for like 100ft and I don't find the RG very effective for range;, what's the point of the wireless STB then? Anyway thanks.

The problem maybe with the redefining services on the extender. Don't! Just let the default settings apply and make your connection to the AT&T router, your solution is that simple.