I recently ported 2 lines over from Verizon to AT&T and took advantage of promotions to get great deals on a S20 5g and a Note20 Ultra. I traded in a Pixel 3 128gb in PRISTINE condition as part of the promotion for the Note20, which as explained and shown on the AT&T website would satisfy the $60 threshold for trade-in value. The S20 did not require a trade in for the promotion, so this post is specifically about the Note20 promotion.

After submitting the trade-in promotion, AT&T sent me a thin, wimpy, padded envelope to send the phone to their trade-in facility. I packaged the phone in the envelope, but then wrapped the said envelope in my own bubble wrap, then stuffed a small carboard box in more padded wrap before shipping it out.

A few weeks later, I received an email with the confirmation that the phone was received and the phone value was determined to be $45 due to "Screen not working - Screen has major Burn-in/Bruising". This is absolutely false and I see this as fraudulent activity to scam customers out of a  major promotion.

I called the trade-in phone number to describe my situation and explained that I would be filing a FCC and BBB complaint about the situation and if not resolved would be opening a small claims case against AT&T. The representative I spoke to told me notated what I had said, and explained that "this issue is being escalated to Tier 2 support and they will contact me within 72 business hours".

For Reference, this is what the Status Tracker shows:

At this point, I am appalled by the amount of similar complaints regarding a similar situation and wish I would have looked into this before switching to AT&T from Verizon. Whatever promotion AT&T claimed to have are not worth this situation. I hope this gets resolved, because THIS WAS THE ONLY REASON I SWITCHED, and if the situation stays as in, I am on the hook for the full retail price of the phone totaling $1,300 or $43 a month!

I am a very calm person, but the rage this has me in makes me question my sanity!

If AT&T plants to not honor the proper trade-in value and promotion I will be submitting FCC and BBB complaint as well as opening a small claims case, as I stated to the representative I spoke to.

I should have stayed with Verizon. Words cannot describe how irate and disappointed I am with my move to AT&T.

For anyone reading this before making a move to AT&T: If you are even halfway happy with your current wireless service provider, PLEASE stay with that provider.

I paid more than double what my monthly charge should be for the first month of service because various promotions didn't kick in yet. I understand that some promotions are not applied immediately, but what happens to the extra money ill be paying in the interim?

With the presumption that AT&T does honor the Note20 promotion, Do these promotions become retroactive for these months? Or do I pay 2 months of full price monthly installments, then go to the promotion monthly price?

Today I submitted a formal complain with the Better Business Bureau regarding this matter. The sad truth is that there is many listings for this same Note20 Promotion under the AT&T BBB page.

The positive thing I can take away from this at this time is that it appears that once a complaint is filed with AT&T, they typically resolve the issue rather quickly. AT&T does have an "A+" rating on BBB, which means they resolve customer disputes efficiently and often.

I still feel this is a terrible and fraudulent business practice by AT&T. And, it's just as bad that customers are forced to seek assistance through the BBB to get something done about said practices.

I will update once BBB has responded or resolves my complaint.

I am currently going through this exact situation. traded in 2 galaxy s9 plus. Both in perfect working condition no screen issues. I get an email that my trades were accepted and I should receive my GIFT CARD in 4 to 6 weeks. Um no, first off. Secondly they are trying to say one had a cracked screen which it didn't and valued it at 55$, 5$ below the promotional threshold making that line ineligible for the promotion. I am getting nowhere. I keep calling, asking for updates, etc. This has been a nightmare from the start and I wish I would have just stayed with Verizon as well.

also on top of all that I am not receiving the Corporate Discount for Elite Unlimited plan either.

Submit a BBB complaint right away and have all your information on hand. I have already been contacted by the office of the president of ATT and am waiting on a resolution. They are investigating the issue and was told they "could not promise anything". I'm very much hoping they make this right.

If you look at the BBB AT&T page, it is full of complaints about the Note20 promo associated with trade in issues, just like ours.

The person I spoke with seemed genuine about wanting to fix this and about my satisfaction as a customer. I am atill very upset that I have to be dealing with this in the first place.

I'll update once I have a resolution from ATT / BBB complaint.

Hopefully I don't have to resort to a small claims case.

I immediately did so after finding your post! Will keep you posted as well!!

We are having the same issue with the trade-in phone being submitted in perfect condition (we had recently gotten the phone from the insurance company, within a couple weeks - so it was still under warranty), and they're saying it didn't work (screen wouldn't turn on).  Any updates on the BBB complaints?  We are not sure what to do next here.

Issue has been resolved after the President of the Office at ATT contacted back after the initial contact they made. They didn't necessarily say they adjusted the trade in value, but did provide me with the $1,000 in bill credits which was the ultimate goal.

Considering the ATT BBB score is A+ but the customer score is 1.11/5, that tells me the resolve a high percentage of complaints bit people still have many issues with the company.

For anyone reading this who may have any issues whatsoever with AT&T or other company, I urge you to submit a BBB complaint to get the company your complaining about to take action. In this case, it worked out very well.

Overall, I still do not like that this whole situation happened, and even more so that's it's not an isolated incident. The AT&T page on BBB clearly shows many people submitting claims for the same exact promotion as I did. AT&T definotely has bad practices about trying to screw over their customers. Whether on purpose or by way of a third party phone trade-in facility that isn't being honest.

It is hard to look at AT&T the same way after this. I had to spend hours of my time researching and stressing over this situation when it could have just went smooth from the get go, but that obviously didn't happen.

I finally got my issue resolved after the BBB complaint as well and dealing with the office of the president as well. So they say.

There must be something that can be done with this fraudulent practice that AT&T is continuously doing to so many loyal customers.  I had a similar situation where I was supposed to get $600 credit for two phones, but have only gotten $40 as of this writing.  If anyone finds a resolution that finally works, please post for others to read who are involved.

This is unbelievable that ATT is allowing this to happen to loyal customers... I am with them since 2008. Have video evidence of my Note 8 before I sent it off to them which now magically has a cracked screen.   I am just starting this process.  Have spent countless hours with customer service spinning circles...

If you don't mind me asking, what did you guys put for "How would you like this matter resolved?" in the BBB complaint?

We put we wanted the trade-in value adjusted appropriately and the $1000 promotional credit applied for each phone. They wouldn't adjust the trade- in value but they FINALLY gave us the promo credit, only after they found out I had video of me turning my phone on and off and packaging it with no defects.

@lafemmej42 : Did they give you a call after you submitted the complaint? Also, what did you choose for this option (in the attached picture)? Thank you for responding so soon! 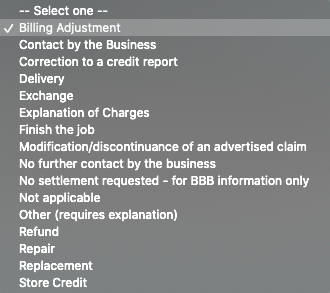 It took a week or two before they called. Hmm I think it was either billing adjustment or other and we explained

Thank you. I just submitted a complaint. I hope to hear back from them soon.