E-mail received that was upgraded to Unlimited Elite at no additional cost. Next bill was $45 higher and CS would not resolve

On July 2 I received the below e-mail stating that I had been upgraded to Unlimited Elite at no additional cost.  On July 22 I received notification that my bill was ready and when I looked I blew a gasket as my bill was more than $45 higher and was completely incomprehensible with all the reversals and additions AT&Ts billing system made.  I did not authorize this change and after 4-5 hours on the phone (mostly waiting for yet the next person to pick up), the best the billing department could do was revert to my previous plan.  Lawrence explained that my plan has been discontinued but that I would have been grandfathered in since I signed up prior to AT&T discontinuing the plan (unlimited Extra).  He also thought that I should not have been charged anymore than $20 extra and couldn't really explain why it went up $45. He didn't even try because the bill is a complete mess; just offered to revert back so I wouldn't have to pay anymore than my last bill. Also said he couldn't do anything for the 4-5 hours I had to spend trying to resolve this (I feel I should have received a credit for such an inconvenience).  Additionally CS reps in India refused to let me speak to anyone that spoke English, also couldn't understand the bill so offered nothing more than to revert back to old plan but not before trying to justify that I was getting more data for the increased price (which I don't use what I have ,why do I need more?).  Additionally, she had no idea about the automatic upgrade and asked me for proof.  She tried to give me an e-mail address of resolved.att.com and insisted that there was no @ for this e-mail address.  Of course I persisted because all e-mail addresses have to have an @ sign.  She then comes back giving me resolved@att.com which is a bogus-mail address. I've tried different versions and all of them are invalid. Customers paying good money for service should not have to spend so much time trying to get a satisfactory resolution to a problem they did not create.    AT&T should honor this e-mail but CS refuses to.  As soon as my iphone contract is up, I'm done with AT&T.  This was the last straw (been a customer for many years on an off and each experience just gets worse).

Wasn't able to save original post with image of e-mail that I received so image below. 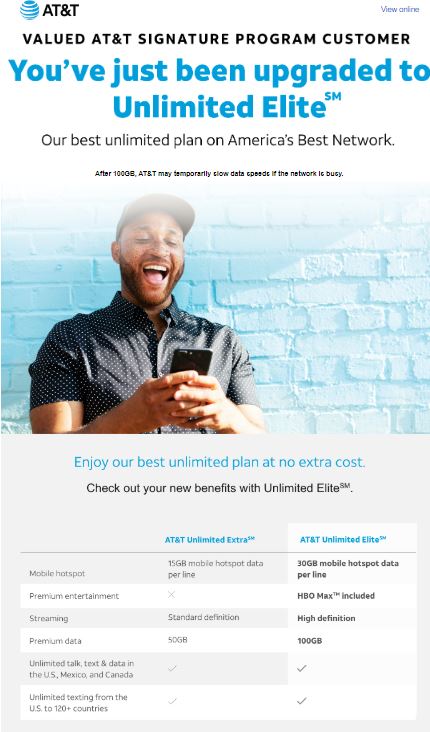 Same thing happened to me. After calling 10 times and waiting and being transferred to different departments the LOYALTY department helped me somewhat but now I still see they are charging me for the elite plan 60 per line (cuz I have 3) but my previous plan was 50 and the email said upgrade at no extra cost. They are being terrible. Will report to better consumer bureau.