Announcements
Get to the head of the class with our Back to School deals!
D

BEWARE - AT&T does not honor advertised promotions on their website

On Jan 28, 2020, I saw a promotion on AT&T's website that you could get the iPhone XS for only $10 per month for a total of $600 in bill credits by just upgrading an existing line. The promotion said I just had to trade in an eligible smartphone (I had an iPhone 7 and that was on the list of eligible phones) and I had to have an unlimited wireless plan (I have Unlimited Plus). I wanted to make sure I definitely qualified for the promotion before going through with the upgrade so I chatted online with an AT&T rep (I have this conversation saved). The rep went over all my details and said the promotion did apply to me and I would start seeing the credits on my bill within 2-3 billing cycles. I completed the upgrade online, got the iPhone XS in the mail, then took my iPhone 7 to an AT&T store to trade it in in person because I didn't want to risk mailing it and it gets lost. When I traded it in I was given a receipt with a confirmation/tracking number to prove I gave up the phone. Every bill since I upgraded shows that I'm being charged $30 for the XS but I'm not receiving the $20 credit. Every month since I upgraded I have chatted with a rep online and they all tell me that the promotion applies to me and I should be getting the credits. In April I tried contacting AT&T through Twitter and when a Social Media Manager called me back, instead of providing actual service and assisting me he told me point blank the promotion didn't apply to me because I was supposed to add a new line. I read off the promotion page that I saved to my computer (it's attached below) and told him I had saved conversations with multiple reps confirming I was eligible for the promotion and he didn't care. He just kept telling me I didn't qualify and I had to pay the full amount for the phone. I decided to ignore him because of the saved conversations and the saved promotion page that proves I didn't have to add a new line. I chatted with someone again in May and again today and those conversations also ended with the rep telling me I should be getting the credits. The rep I spoke to today said she didn't understand why it wasn't showing up on my bill even after 2-3 billing cycles passed so she told me to call the Mobility Department (877-999-1085). I called the number and spent over an hour on the phone with someone. It finally seemed like I was going to get my credits because the woman confirmed all my details and said she would credit me, then she put me on hold for a while, just to come back and say she couldn't give me the credit because I have a "multi-line" unlimited plan. She also couldn't see anywhere in my account notes that I traded in the iPhone 7 even though I gave her the confirmation number that was printed on my receipt. At this point it's clear they just don't want to give me the credits I'm owed. It doesn't even matter anymore that I fulfilled all the requirements in the advertised promotion, it's the fact that multiple reps told me I am qualified for this promotion and I should be getting the credits. If AT&T employees are telling customers that they will be getting credits on their bill and the conversations are saved, AT&T should be honoring that. I was fine with my iPhone 7 and it was paid off in full, I didn't need a new phone. I only upgraded because I thought it was a good deal, only paying $10 a month for an iPhone XS. I wouldn't have upgraded my phone if I had to pay $30 a month for it. Most important, the only reason I went through with the upgrade online is because the rep told me I was good to go. I will never upgrade my phone again with AT&T unless it's an absolute must like if I lose my phone or it breaks. Anyone who wants to upgrade needs to be careful because even with proof and saved conversations, they just don't care and won't give you what you're due. I'm going to report this to the FCC and BBB because this is not the way to do business. I should not have to pay $900 for this phone. AT&T needs to honor their promotions and follow through when their employees tell customers certain things. 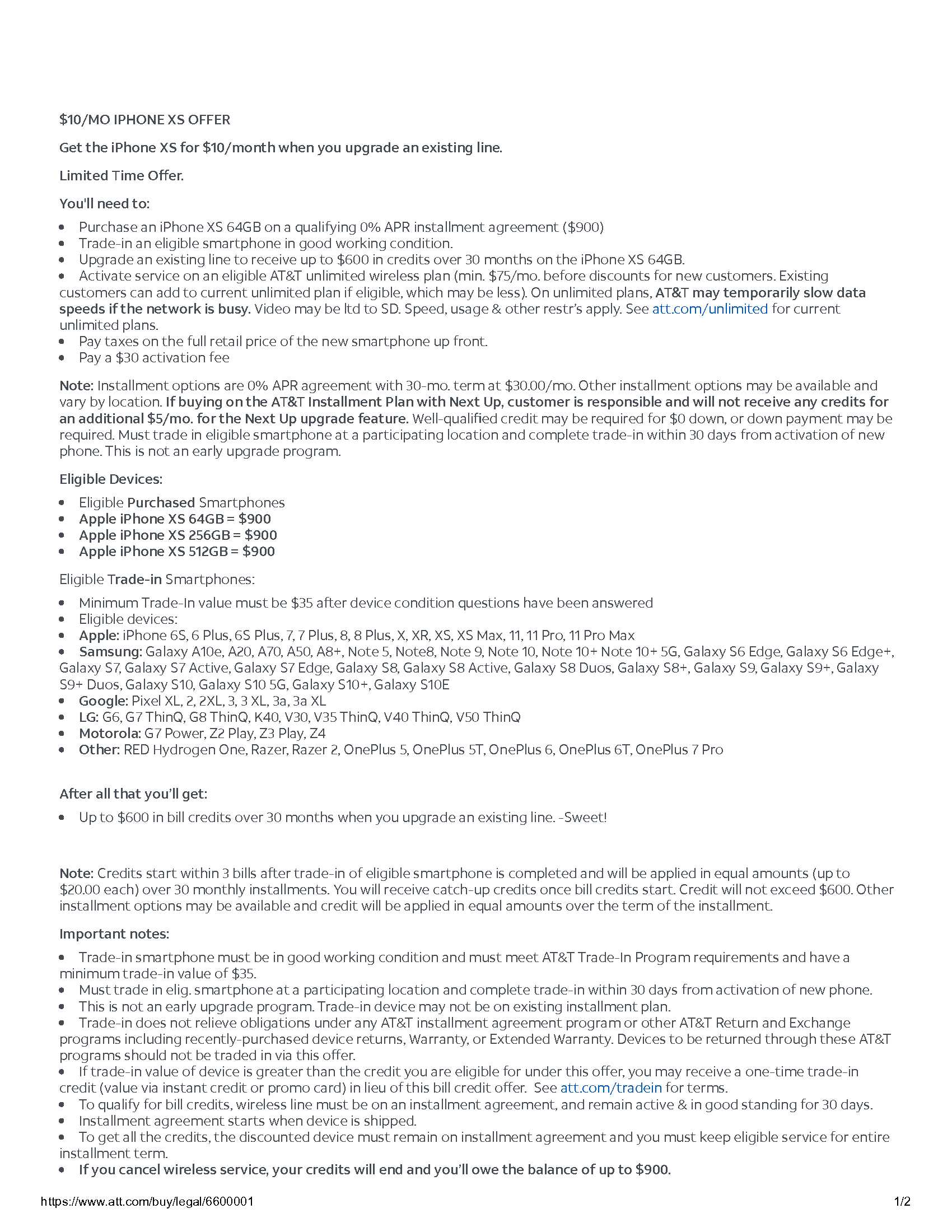 @ATDoesntCare you’re right. I didn’t realize how much I typed.

It's been almost six months, this complaint should have come to the Forum 2 months ago.
There are only two relevant questions. 1. Was the iPhone 7 that you traded in sent in with the correct promotional code and on time and received by AT&T? 2. What's the iPhone 7 that you sent in good physical and working condition without any cracks, chips, dead spots, and factory reset with your iCloud lock removed?

With the phone being that old it is pretty easy for one minor blemish/defect to cut the value of an iPhone 7 2 Under the $35 minimum required.

If you can track the phone back to AT&T, they received the phone and admit so oh, and the phone was valued at $35 or more, then you have grounds to force AT&T to pay you.

Start by filing a Better Business Bureau complaint online.
Also write a letter of dispute:
IF YOU DISPUTE ANY CHARGES ON YOUR BILL, YOU MUST NOTIFY US IN WRITING AT AT&T BILL DISPUTE, 1025 LENOX PARK, ATLANTA, GA 30319 WITHIN 100 DAYS OF THE DATE OF THE BILL OR YOU'LL HAVE WAIVED YOUR RIGHT TO DISPUTE THE BILL AND TO PARTICIPATE IN ANY LEGAL ACTION RAISING SUCH DISPUTE.

@lizdance40 I didn't write anything in the forum earlier because I was going by what AT&T was telling me. They said the credits would show up on my bill within 2-3 billing cycles so I waited. Now that 2-3 cycles have passed and they still won't give me the credits, that's why I finally posted. Yes my iPhone 7 was in very good condition and it's listed on the promotion as an eligible phone. I had it factory reset when I brought it to the AT&T store to trade it in and I traded it in only a couple of days after I completed the upgrade online, it has to be done within 30 days. I used a promotion code when I completed the upgrade online. When I traded in the phone I just brought it to the store and they gave me a receipt that shows I brought it in to the store and it has a confirmation and tracking number. I covered all the bases and they won't give me the credits I'm owed so I filed complaints with Better Business Bureau and FCC last night.

Both is redundant, but fine. Send the letter to address i posted. if it goes to arbitration or small claims that is how you protect your rights

UPDATE: Filed complaints with both FCC and BBB and was contacted by AT&T. Despite my screenshot that came directly from AT&T's website that clearly shows the promotion was for upgrading an existing line, they stick with their stance that the promotion was only for adding a new line. It doesn't make any sense. I give up, switching to T-Mobile because I should not have to pay the full $900 for this phone. AT&T screwed me out of $600. Good luck to anyone who plans to upgrade using one of their "promotions."