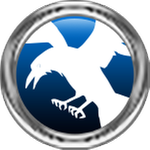 USPS lost my package, AT&T won't refund the down payment I paid

I called AT&T on January 21st, 2019 to take my husband and my phone line out a family plan and get our own AT&T account for them, the AT&T representative lied to me by assuring me that I can buy two new lines and devices, then replace the new phone numbers with the original numbers we want to keep once we receive the devices. I paid $511 for the down payment and tax. We soon found out it's impossible to replace the phone numbers, so we shipped both devices to AT&T through USPS with AT&T return label two days after we received them.

It has been showing the package is in transit for 8 months, AT&T told me I'm responsible for the missing package to be delivered and they can't credit me 511 dollars I paid because of that, even though I did my part to ship out the return package and kept the receipt.

I have been calling att more than 20 times, they just keep submitting requests and none of them got through, why does it have to be so difficult to deal with an issue like this? It's not on customers to make sure the package is delivered. I just call AT&T again, they said I have to find out where the package is and get it delivered to AT&T, however, if the package is missing in transit, I won't be able to get my money back. AT&T choose the package carrier, why do customers have to pay for their mistake? It's unfair that AT&T doesn't give my money back? Now I paid $511 for nothing and I don't own these two devices, it's such a dishonest business.

We'd be more than happy to take a closer look into the status of your returned package. We'll be sending you a private message to request account information shortly.

After doing some researches of the missing package online, it's very likely Newgistics agent STOLE the phone because USPS tracking status stopped updating after "Delievered to Newgistics agent" and Newgistics is notorious for doing such things. AT&T puts customers' hundreds of dollars of the valuable devices they returned on the risk because it's a cheap option of AT&T business, how can you pass the cost to customers and waste their time to deal with it?  The representative just tells me we can't credit you because we don't receive it, why don't you receive it? because the shipping agent you choose stole it, how can it be received? or it might be one of your business running strategies. Why can't you track the IMEI number and find out where they are? you're not even trying to help customers out!

Believe it or not, this happened to me, 2 years in a row with Next returns. I ordered my new phone, and placed my old phone in the box and affixed the return label, I dropped the package off at USPS and the next day, the tracking said “available for returns agent.” Which means someone is supposed to come pick it up. That USPS status stayed that way, for 10 months. And AT&T charged me a no phone return fee, of $700. 3 months after I dropped the package off, At&T showed on the IMEI that the phone had been used a number of times, after the return shipping date, confirming that the phone had been stolen and used. Fast forward to a year later. And the same exact thing happened. I scanned the package in, at the post office, and it never made it, and AT&T charged me the full price of not returning the phone. Took less time to get it taken off my account, this time, but it was still not without a dozen calls to get it taken care of.