After live chat with AT&T agent , as he said I’m qualify for BOGO promotion buy one get one free for iPhone 11 pro Max after added new line but I’m not qualify for 300 gift card because my plan is not unlimited data plan.

After I got confirmed from AT&T agent , I bought two iPhone 11 Pro Max.

Couple months later I still don’t get BOGO promotion. I’m paying two phone. And I called AT&T , agent said my data is not unlimited plan that’s why I’m not qualify for BOGO promotion.

Then I asked her how can I fix it. It was before Christmas. She told me to change unlimited data plan and get buy one get one free and 300 gift card . I asked her after I changed plan am I qualify for BOGO promotion and her answer was yes . She also told me unlimited data plan is cheaper than my present plan. I asked her another question that do I have an insurance for one phone? She said yes .. but i didn’t see any insurance on my AT&T application.

Today I got my bill. My bill is jump to 340 and something dollars. I called to customer service and asked them what is wrong with my bill. I talked with supervisor to fix the things. She denied previous agent said that I qualify for BOGO promotion. And she changed back my old data plan.

After hang up with her I call again for unlimited plan which is cheap than my present 20 GB family plan. That agent was explained me and compare old plan and new plan. I decided to change. Previous supervisor didn’t offer or fix the thing.

If I’m not qualify for BOGO promotion why should I buy iPhone from AT&T ? I will go to Apple store and paying cash for new unlock phone .I can buy cash.

AT&T employee gave me wrong information and cost me couple hundred for open new line and bla bla. Is that how AT&T treated to customer who is almost 10 years belong with AT&T.

I want AT&T customer service know, if AT&T don’t fix AT&T employee that gave me wrong information and cost me money for that issue , I will definitely change another carrier.

I will wait two weeks to fix that. If nothing response from AT&T , I will definitely leave AT&T.

Almost every promotion for phones since April 2019 has required BOTH a new line and unlimîted data plan.

5 minutes online and you could have confirmed the price of the plan compared to 20 gig plan.

You also could have qualified for the $300 deal, which was advertised online, as an online only deal. 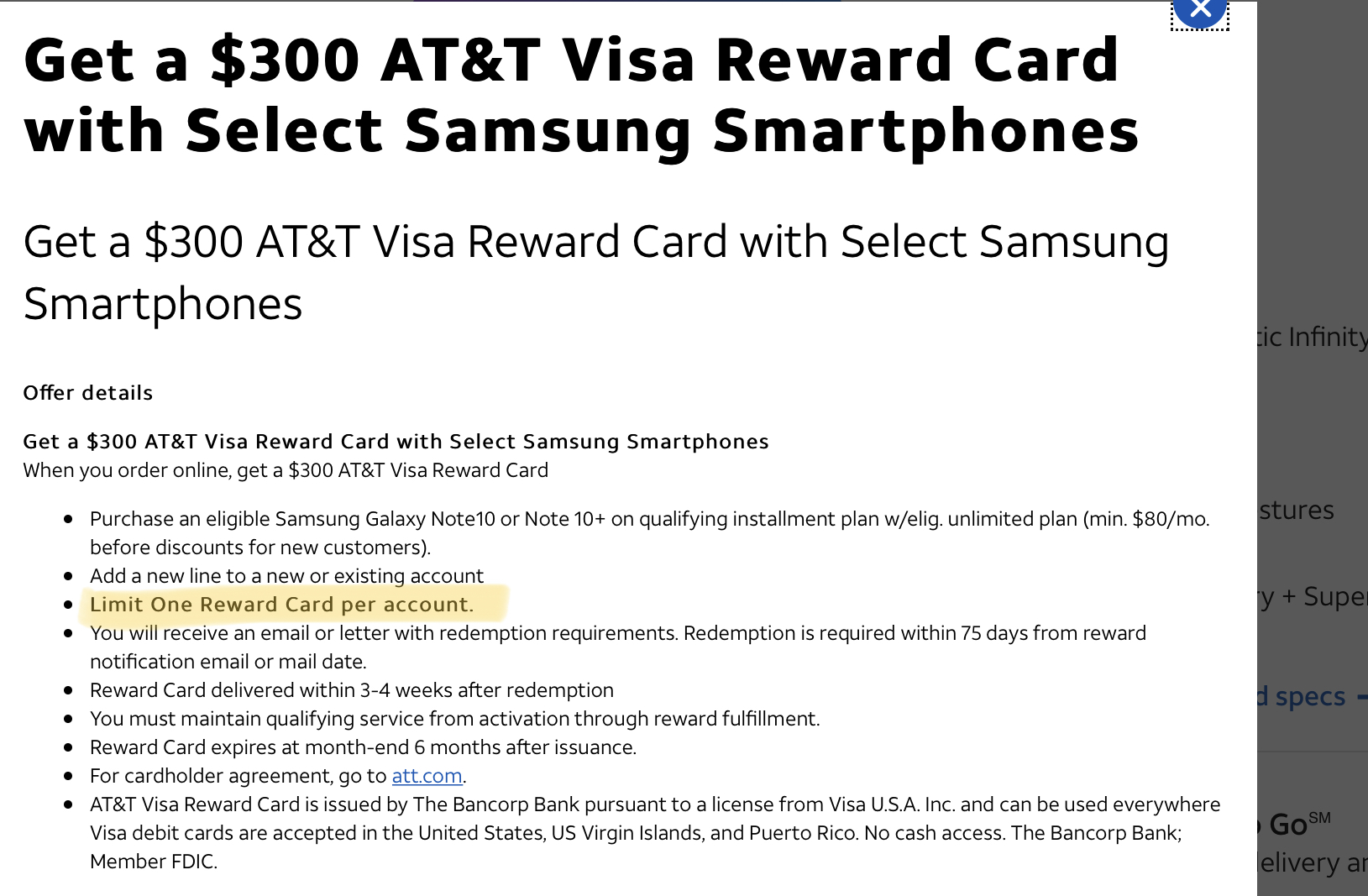 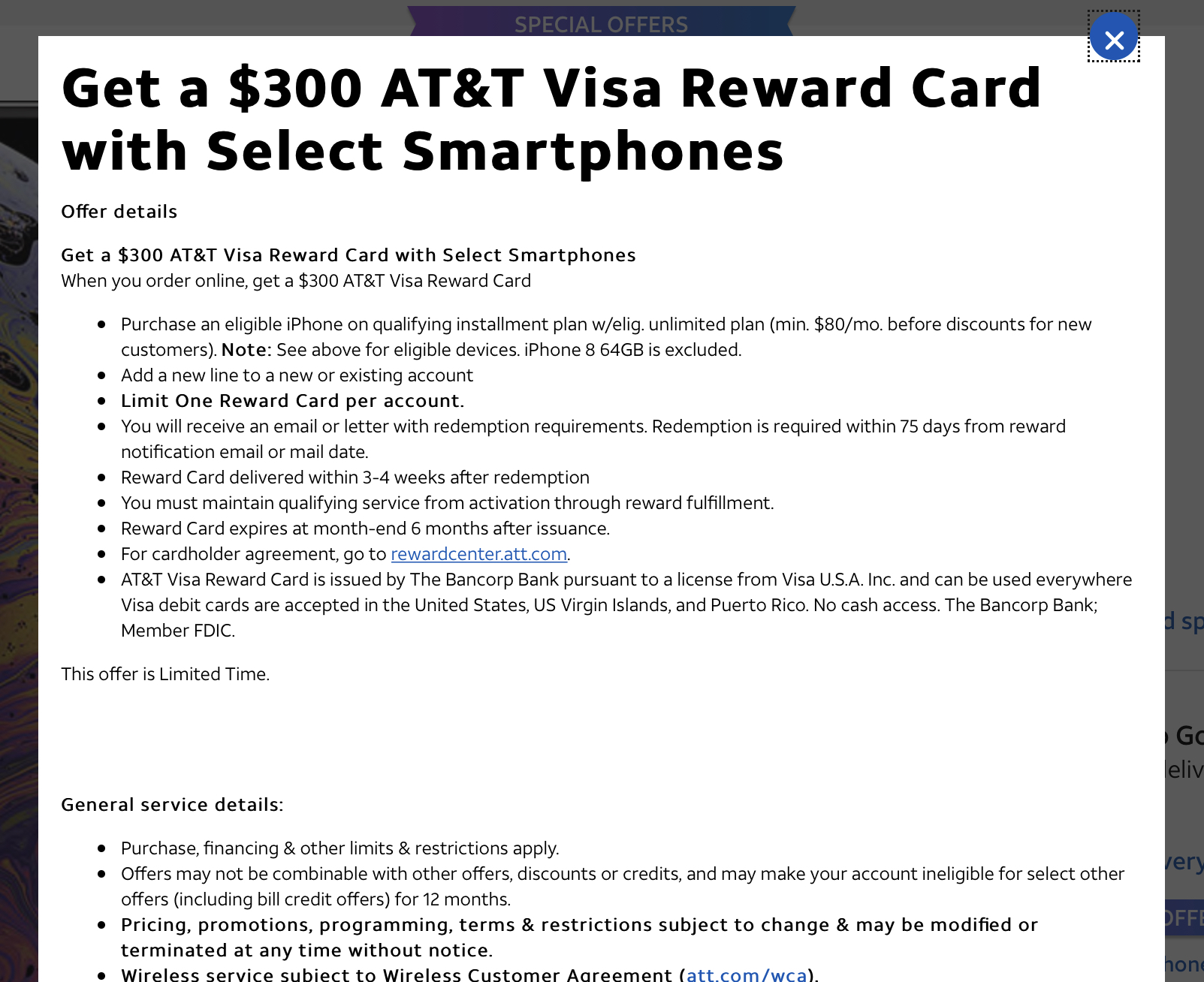 I had to get my magnifying glass out to read the online part, and because one line is highlighted in yellow, that's right where my eyes went, but you're going to tell me you highlighted that sentence, and I don't understand why. Since there are two advertisements, and very difficult to know if all of the same information is on both, why are there 2 ads. "Select Smartphones" should tell you everything one needs to know. Again, not knowing the full information, the ad's could have come out at different times.

Life gets very overwhelming these days, for all of us. May I simply suggest that you pay more attention to the person commenting, without thinking ahead about your response.

@lizdance40 You don’t understand what I’m saying. AT&T need to train their employees. All employees can give the right information to the customer.

I’m talking about is AT&T employee gave me wrong information and cost me money . That’s not my fault. Very simple. I’m paying them for the service. I have money. If they dun offer me I have no reason to buy iPhone from AT&T. I will go to Apple store and buy the unlock phone. I dun give a (Edited per community guidelines) for payment.

They offered me for the promotion if I add new line I can get buy one get one free. If I change unlimited data plan I also can get 300 gift card.

AT&T didn’t take responsibility of their employees mistake . That is what I’m talking about . Usually I dun care about money. I feel like AT&T cheating my money and gave me (Edited per community guidelines). That feeling was bothering me still.

Do you got that ?

This is a customer site and not directly AT&T. With that said, it is beneficial to setup through a local corporate AT&T store where you can work face to face with a representative and make sure your offer is recognized (usually takes 1-3 bills for a BoGo credit to show up). It sounds like you jumped all over between store, online, chat, etc. This creates more issues with multiple channels and people involved. If you’re in att.com, all offers have a clear “see offer details” link below the deal that shows requirements listed. The $300 was an online only offer, so if you can read the onlin and don’t need assistance form a store, then order it online after verifying offer yourself. If you feel you need help, then go to the local store for best experience.

Of course , every offer from AT&T is so complicated. That’s why I went to store for assist. I also weak in English, that was one reason I need to make sure before I bought it. I’m not doing stupid complain for that. My complaint is AT&T need to train their employees from live chat and they can give us right information.

Now is sounds like u guys are defending for AT&T. I have money and I can buy at Apple store unless I got offer from AT&T.

A little over a year from the date of your post and right now 2021 I'm in the same boat dealing with the issues due to an AT&T employee giving me wrong information, costing me over a $1000 for opening a new line. I have been a long time customer almost 20 years belonging with AT&T and they don't care about the loyalty at all! Truly sad how us consumers are taken advantage of by their employees. Time to move on to another provider.

A little over a year from the date of your post and right now 2021 I'm in the same boat dealing with the issues due to an AT&T employee giving me wrong information, costing me over a $1000 for opening a new line. I have been a long time customer almost 20 years belonging with AT&T and they don't care about the loyalty at all! Truly sad how us consumers are taken advantage of by their employees. Time to move on to another provider.