We’re in the home stretch – the back half of the last season. With the Battle of Winterfell behind us, it’s time to get into the end game (no, not that one).

The episode started off with the burning of the bodies from the battle (something tells me that this will replace all previous forms of burial until the end of time), some heartfelt moments seeing Jorah, Theon, Lyanna, Edd, and Beric all laying on funeral pyres, and a commanding speech from Jon honoring their sacrifices.

Afterwards, we saw a return to a more familiar Game of Thrones storytelling that was focused less on epic battles, and more on subtlety, manipulation, and plotting. In a battle, enemies are easy to spot, prepare for, and fight; in politics though, your enemies are not always as obvious.

Now that Daenerys is aware that Jon is a Targaryen, the dynamic has clearly changed. Daenerys wants things to remain how they were before she found out, and Jon is hesitant about keeping it quiet.

Jon is threatening her plans of taking the throne merely by his existence – and she is having none of it.

I have a sinking suspicion that only one of them is going to ultimately survive; and I’m not sure who I want to win between them at this point.

I think this is best summed up in an image… 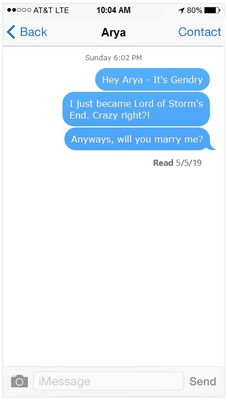 In the final season, there just isn’t any better time than now for characters to resolve the series tension (and you know; everyone else was doing it).

After all Jaime has done though, I doubt there’s a happy ending in store for him. With him leaving to (presumably) go off to kill Cersei, I don’t think these two will grow old together (although I wish they would for Brienne’s sake).

It’s great to see them back together, pulling the strings from the shadows. After getting little screen time this season, we got the familiar notification of…

Both characters play 4D Chess, so when Varys let Tyrion know his thoughts about Jon taking over the throne and… well, you know what would need to happen to Daenerys to make it a reality – it came as a surprise to see how blatant he was about it.

Is Tyrion going to turn him in? Conspire with him? I have a feeling they’re playing another game entirely.

Daenerys is down to one last dragon – is one going to be enough to take the throne?

Missandei is dead – Grey Worm is not going to take this lying down. With her final words being “Dracarys” which means “Dragonfire”, I think we’re about to see the world burn.

Is Euron the father of Cersei’s baby? How would Tyrion know that she was pregnant? Was all this just a way to put doubt in Euron’s head and hint that Cersei may be using him?

This episode saw the death of Missandei, a beloved character. With two episodes left and a looming battle that may be bigger than the one just witnessed, I think the deaths are just getting started.

Who is going to take the throne? Let me know below your thoughts, speculations, and guesses.

I thought it was a good episode, but I'm kind of GOT agnostic. I don't really care who gets the throne, so I wasn't rooting for Daenerys or anyone else. But seeing the reaction online, some fans are ready to burn the writers at the stake.
My thoughts:
- I'm glad Jaime gave his speech about how he's not a good man, because I'm not having his redemption arc. I never forgave him for pushing Bran out of the window, even if Bran did. Now maybe Brienne will go to her true love, Tormund.
- Some people are upset about Daenerys turning into a tyrant, but it's like that old saying, "Power corrupts." She's been through so much that the throne means everything to her, and she's willing to do anything to get it.
- The romance between Jon and Daenerys has a "Luke kissing Leia" feel that makes me queasy.
- The final episodes seem to be setting up a battle between Jon and Daenerys for the throne, which should be interesting. Maybe one will have to kill the other. I'm guessing Jon wins in the end.
- Good riddance to Ghost. The direwolves were all setup, but never had any impact in the story at all.
- So far, the showrunners have nowhere near the guts of George RR Martin in terms of killing characters. I can only imagine GRRM would have kept Jon Snow dead, killed Daenerys and Tyrion, and end with the Night King claiming the Iron Throne after wiping out all of Westeros. But that's just a guess because Martin won't release his book.
The plot holes are flying lately, like:
- Why would Sansa cry over the death of Theon, a man who helped force the Starks out of power, and literally stood and watched her get brutally ravaged?
- How did the Daenerys and the dragons not see the huge fleet coming to kill them? They're airborne.
- How did Cersei's fleet get all the way to Winterfell from King's Landing, kill the dragons, then sail all the way back to King's Landing, and then Daenerys' fleet get all the way to King's Landing after them in what felt like a day?
**Disclaimer: I don't work for AT&T, have never worked for AT&T, and have never been compensated by them in any way, shape, or form**