We’re just past 1/2-way through the NBA season and I’m wondering what, so far, everyone’s biggest surprise is?

Mine is that the Sacramento Kings has become my go-to NBA League Pass team.

Now he's a possible Sixth Man of the Year and All-Star.

It's also pretty surprising that my Lakers have gone 5-7 without Lebon.

Who would have guessed that the Denver Nuggets would have one of the best records in the league?

Jokic is an absolute monster. He is the main reason Denver is where they are.


Jokic is an absolute monster. He is the main reason Denver is where they are.

I agree, @Ulak34 - Jokic has been really impressive. Still, even with Jokic, I thought the ceiling for the Nuggets would be 6th or 7th seed.

It's really something that they have done as well as they have - especially with all the injuries they've had all season, imo.

@davidbk I agree, It's refreshing to see someone other than the Warriors/Rockets/Spurs battling for the top spot. Unfortunately my Suns are at the bottom of the barrel, so the NBA hasn't been as fun for me. Think they make it far in the post season?


@davidbk I agree, It's refreshing to see someone other than the Warriors/Rockets/Spurs battling for the top spot. Unfortunately my Suns are at the bottom of the barrel, so the NBA hasn't been as fun for me. Think they make it far in the post season?

They should easily make it to the second round but then I think it's going to depend on match-ups. I can see them beating a Trailblazers / Jazz / Timberwolves team but I'd have to go with Warriors or Rockets whenever they ran into them.

Look at the bright side, Devon Booker is a legit player and - hey - at least  you didn't sign Carmelo, right?

Ahhh Melo. What a shame how his career is ending, Still can't believe the Nuggets team with him, Billups, and AI didn't win, but Kobe's Lakers were a forced to be messed with.

D Book is nice, but he doesn't have the leadership in him yet, Granted he's only 22 and hopefully will develop that shortly, I am worried about his injuries though, hopefully we don't see what happened to Brandon Roy.

I feel like the Nuggets can give the Rockets a good 6/7 Games, I'm not sure about the Warriors though. If Boogie can come in and mesh up correctly with these guys, that might be all she wrote for the western conference.

I still have an entirely irrational love for Melo. I hope he ends up somewhere where he can wrap up his career with a little dignity. I know I've read that the Lakers may be interested in him and - honestly - he couldn't be much worse than Michael Beasley.

I hope y'all find a good PG - I think Booker would really flourish if he could just focus on being a shooting guard and not worry about trying to initiate, run and finish the offense. I agree, i'd love to see him get through an entire season without injury but people used to think Steph Curry would always be injury-prone, so there's hope!

Look at me, all glass-half-full and stuff!

B- Easy! Man that's another person who's career has been a huge disappointment, at the very least Melo would probably wear the right shorts. That was hilarious.

You're right, Booker could be amazing, Not having a True PG has hurt Ayton the most. Dude kills it when he gets looks, but no one can truly set him up. I imagine what he would be doing with someone like Nash feeding him the ball. The Suns have a ways to go, I criticize them hard though because we've been out of the playoffs since 09 (I think) and the last memory I have is Jason Richardson not boxing Ron Artest out allowing him to hit the Game winner off Kobe's Airball. Completely changed the whole series around. I remember always being stuck to the TV watching them, missing Trick or Treats because that was the Season Opener usually. This year I find it so hard to watch them. I just want to see them return to the days of competing. Letting Dragic go was a huge mistake imo.

How do you think IT will affect the Nuggets? For the better or worse?

Don't take this personally, @Ulak34, but as a long-time Laker fan; my memory of Jason Richardson not boxing Ron Artest out is probably a little different from yours. 🙂

I'm not even sure Phoenix needs a super PG just someone adequate (although Dragic reminds me that the Suns may be the only team to go from 3 PGs to 0 PGs so quickly). Even though I'm not a fan of his, myself, if I were the Suns I'd offer Detroit some young kids for Reggie Jackson. I agree that having a true PG would be a boon to Ayton. The few times he's gotten going, he's been really impressive. I just hope that he's not learning bad habits during this stretch, you know?

Honestly, if I were Denver, I'm not sure I'd play IT much at all. While I like good-IT, it seems like good-IT hasn't been around since Boston. Denver has such good chemistry, I don't know if I'd risk it. I might buy him out and try to pick up another shooter off waivers. 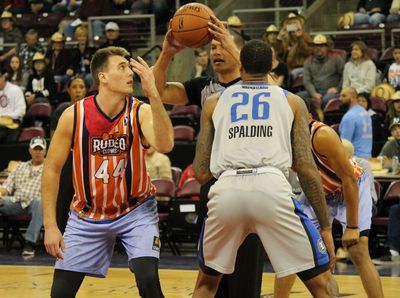 They really shouldn't be making it this easy ... smh

Haha, our memories are completely different then. Needless to say that was one of the first moments I understood what heartbreak was.

I'm not sold on Jackson. He can play, but I feel like the Suns need more of an actual playmaker. I would love to see D Russel from the Nets end up with us. (As long as he don't start tellin', lol) He's young and I feel like he fits our style more. I definitely am not sold on JA Morant, He has a lot of potential but I feel like he's ball dominant and so is Booker. Who knows though, the suns are so young that literally all they're playing styles can change.

G LEAGUE? G LEAGUE? I don't follow it at all, ours are the Gray ones I assume?

IT off the bench can be dangerous though, He was always a decent shooter, obviously a huge liability defensively and pretty ball dominant too. Who knows what's in store for Denver.

Speaking of the Lakers though, what a steal with Kuz, kid is a baller. He's a hustle player and brings so much energy. I hope he can develop the right way. They're a fun team to watch this year, When LeBron is active of course.

No, @Ulak34, the Northern Arizona Suns were on the left. Saturday night, the Suns made their G League team dress like Rodeo Clowns.

You're right, D Russell would be a great fit with the Suns and - since the Nets already have two quality PGs, I bet they'd give him up for some young talent and/or draft picks. Great call!

IT can be dangerous off the bench, but he didn't seem to gel with coming off the bench in Cleveland or LA. I think IT is a great player but one who - for not entirely his own fault - has to prove that he's a starting PG, again. And he seems unable or unwilling to recognize that.

I am really pleased with Kuzma - especially since Ingram has been so disappointing, this season. I really was looking for him to take another lea forward, this year. While I can get being held back a bit w/Lebron - it took a while for Bosh and Love to figure out how to play with James - I've really been disappointed with how inconsistent Ingram has been without Lebron. I havne't given up on him but he's going to have to show some consistency, really quickly.

Speaking of LA - another NBA surprise for me has been Brook Lopez on the Bucks. I've never been a Lopez fan (on the Nets or Lakers). He always seemed scared to work in the paint and - while I don't mind centers taking the occasional three - I didn't like centers taking nothing but threes. However, he seems to have found himself on the only team in the NBA where his (imo) drawbacks are advantages. I would not have expected him to have been this successful and impact, when the season started.

Lol, Those jerseys are hideous. Ingram kind of reminds me of Beasley, all this potential but the ethic/effot is just not there. I agree it takes time to learn how to play with Bron but these guys are young and should have been able to adjust quicker than Bosh or Love did.

It really does fit tthe Bucks to have Lopez though, Giannis & Bledsoe are both Slashers and Lopez pulling the big man out opens up the floor. The Bucks are definitely a fun team to watch too, I don't see them going to the finals though.TOR or BOS take them out imo.