my phone is not in the whitelist

Today, my phone, which is Mi9, doesn't work at all. I can't make any phone call and connect to the internet. Seems that it should not happen until Feb. Please let me know what I should do now.

The February 2022 date is when AT&T will be done with the 3G shutdown, not when they start. They are already shutting down 3G equipment.

No one should think they can wait until January.  You need to get compatible equipment ASAP. 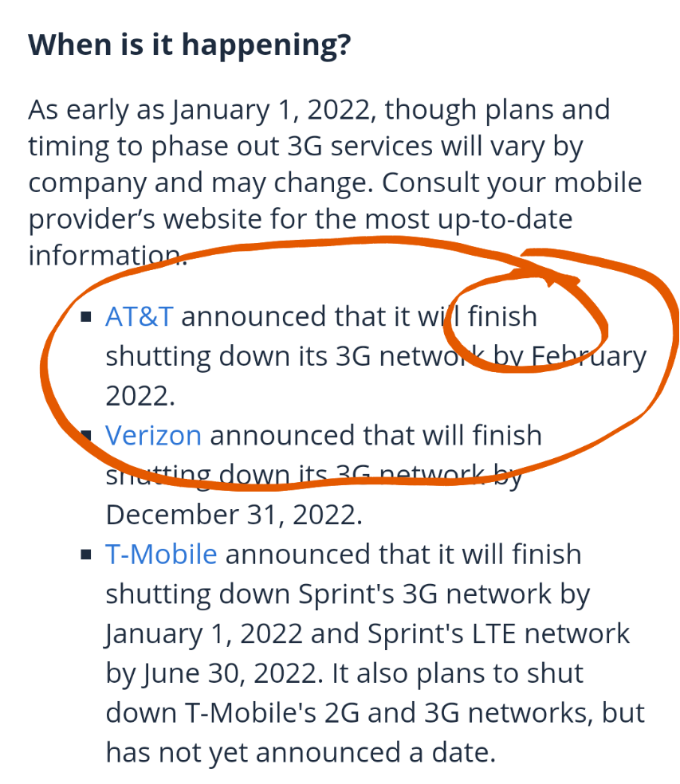 AT&T has been in the news for over 4 years on the shutdown.  The list was available over one year ago.

They never gave me official notice my phone would stop working until I received the new phone in the mail. Terrible customer service, but not surprising. Why not just add more phones to the whitelist? What's the technical problem with doing that?

The phones have to go through certification testing.  The manufacturer has to decide it's worth it to them.

The white list isn't just a made-up list of a bunch of phones they're allowing. The whitelist is list of phones that actually do work on AT&T, with its HD voice protocol /voice over LTE.

There are actually two lists. The other list is a list of phones that AT&T sold that will still work once 3-g shuts down. Not all of AT&T phones  made the list.

I have had several phones in the past that did not work with AT&T voice over LTE. When AT&T started announcing that it would be a requirement going forward or they would not work, I sold those phones.

I purchased a lovely blue Samsung Galaxy S6 several years ago. Every time I made a phone call the notification bar showed an H+ instead of LTE.   I also owned an honor 8 , and a OnePlus 5T. Also dropped to 3 G for phone calls.

If you have been purchasing non AT&T phones for a while you may have gone to the trouble of having to activate service on an AT&T phone first and then switch the SIM card into your non AT&T phone. Or you may have had to program the APN settings in order to get the phone to work properly. This is not something you need to do with a phone that is fully compatible to work on AT&T. If you have had to go through this with your current phone at some point, either moving a pre-provision SIM card, or programming APN settings your phone is not and was not ever going to work going forward.

AT&T puts phones through a certification process just to assure that they do work on AT&T. Any phone that makes the whitelist has gone through the certification process to prove that it does work. At that point the phones are added to the whitelist. If you have a phone that was made prior to 2020, and is not already on the list, it's not going to ever be on the list.

Neither AT&T nor any manufacturer is going to go through the time and expense of going through a certification process on an older phone.

If you are a fan of Motorola, Nokia or Sony, keep harassing the manufacturer to get their new phones certified.  If there's enough money in it for them oh, enough phone sales, they might approach AT&T and get their phones added.

Those global phones, Xaiomi, Ulefone, Redmi, etc, will never make the list.  Unless specifically made for North America, the manufacturer is not going to approach at&t about adding it to the whitelist

Thanks, appreciate the last two responses. That's where the confusion is/was. My phone, Asus zenfone 6, I believe supports VoLTE, but it's not "certified." *sigh* Bunch of (Edited per community guidelines) but that's the world we live in.

But the Zenfone 8 is on the list.  Asus is not going back in time to make things work.  They are only adding phones going forward from the 8

Hi @Moz24762, we're glad that we could help clear up the confusion with the phones that will be compatible.

You can see more details about the 3G shutdown, and phones that will still work on our new network.

We hope this information helps, and thank you for reaching out to the Community.

If you have a fairly recent phone that isn't on AT&T's famed 'whitelist', try switching to T-Mobile.  I checked with them and the Sony I want, that just came out and is absolutely compatible with AT&T, though not yet on their list, will work on T-Mobile, both 4G and 5G.  As soon as I get get that phone it's 'buh-by AT&T, hello T-Mobile'.