Directv On Demand - There was a problem connecting to the internet. Please test your connection

Hi I have been receiving the message in the title periodically for the past month or so.  Recently it's become more common than ever.  I have an AT&T Gigapower internet connection that works perfectly, even during periods where my Genie won't download on demand content.  I can see the traffic flowing from the Genie through my router and abruptly ending in exact timing with the error message on the screen.  During the period where Directv won't download content, i confirm that the internet is working perfectly.  Occasionally, I get a different error message: There was a problem connecting to Directv.  Please try again later.  In any case, after clearing the message, the on demand content download resumes within about 5 minutes and then throws the same error again a few minutes after that.

I have an HR54/500 that was actually swapped out recently by a Directv technician to attempt to fix the issue.  The new receiver has exactly the same issue.  It's extremely frustrating and annoying to try and watch TV with this message appearing every few minutes.  I have attached photos of both errors along with a chart showing the abrupt traffic drop when the receiver stops downloading from directv.

I would like to add that I have the receiver connected via a gigabit network hard line.  I also tried disconnecting this wire and using the wireless to rule out any internal wiring issue.  The same messages appear irrespective of the connection type.

To prove that the internet is working flawlessly throughout all my Directv issues, I have several network cameras streaming content to the cloud and they show no interruption in the feed any time that Directv isn't working. 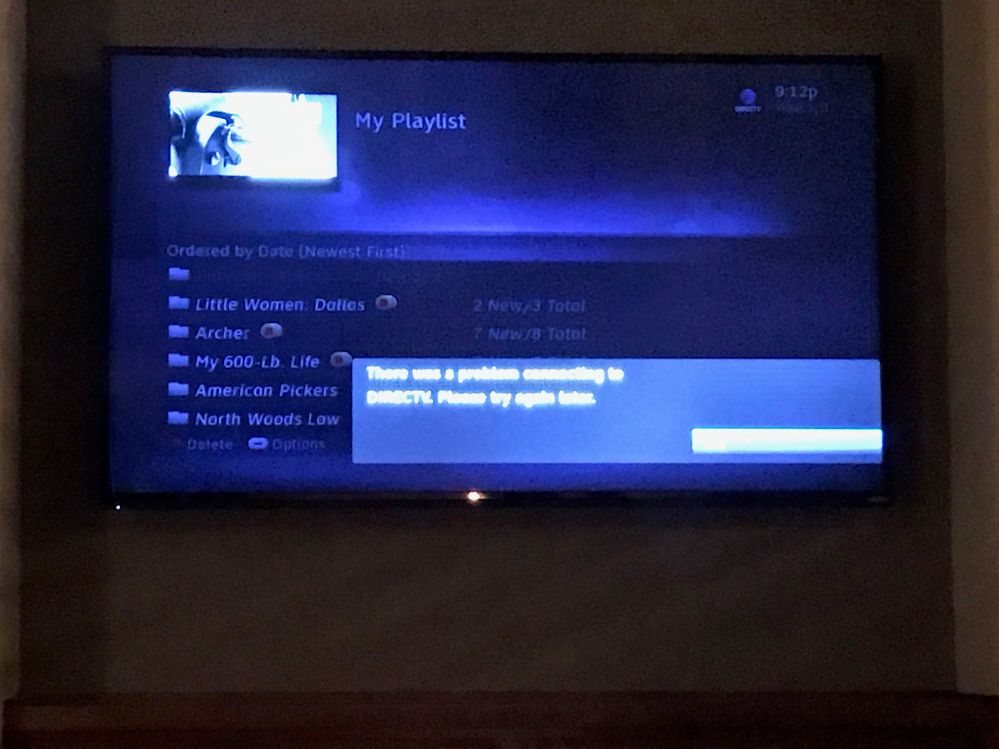 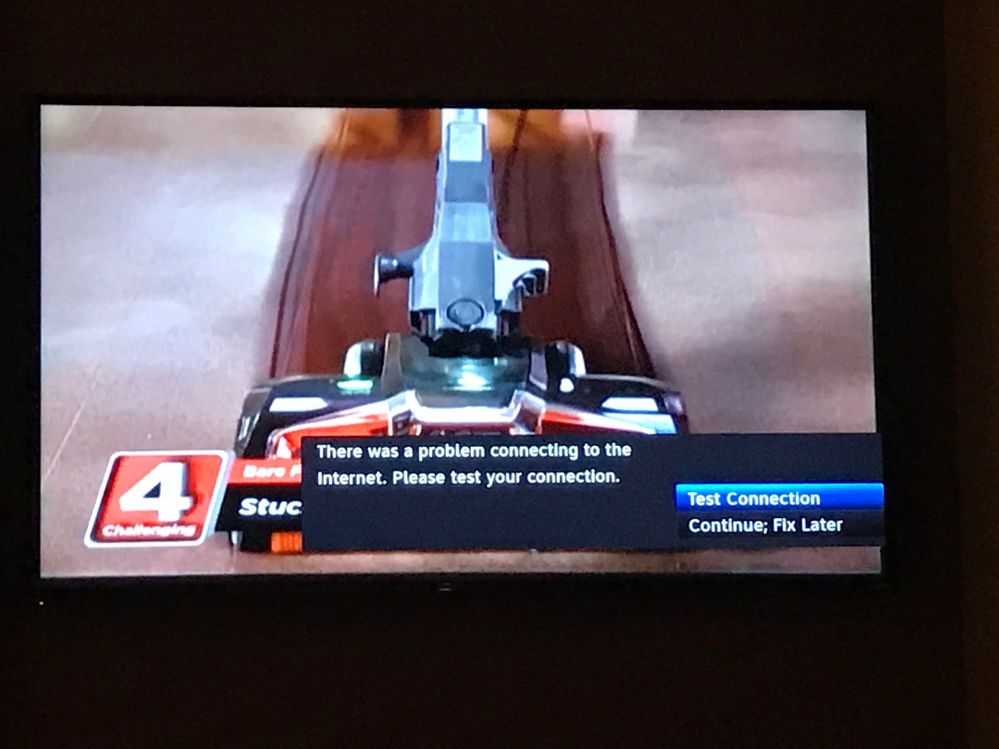 When using an AT&T GigaPower router/gateway in pass-through mode, the DHCP lease given to clients expires every few minutes causing occasional micro disconnects if the AT&T network DHCP server is too slow to respond.  The blip only lasts less than one second, but for whatever reason is enough to kill any DirecTV On Demand downloads.  Other network services seem uninterrupted.  To fix this issue, I set the external IP address of my router/firewall to static and my DirecTV services have worked perfectly ever since.

We are very sorry to hear of the troubles you are having with OnDemand. Please chat with us so we can further investigate and troubleshoot with you.

I called and spoke with Directv and were not able to resolve my issues.  As I mentioned, I was unable to fix the issue even by swapping out my IRD for a new one with the same issues.  I would like to point out that I have a fairly advanced Ubiquiti edgeRouter xSFP so I don't know if there is some setting with UPnP or other protocols that could be interfering with the connection... Since on demand content downloads for a while before dying, I am sure the content is not outright blocked by any firewall settings.  My only remaining ideas, assuming the issue isn't on the DTV side, is that it's uPnP settings or perhaps some kind of connection handling timeout with the router/gateway.  Does anyone in this community have any in depth knowledge of how the actual connections are made/maintained between the IRD and the DTV servers?  Also, does anyone know the IP addresses of the servers used to stream on demand content so that I can monitor the traffic on my firewall looking for issues?

Any help is greatly appreciated, because without on demand mickey mouse clubhouse, everyone in my house suffers. 🙂

I have a similar setup and problem with the at&t router set up as a passthru to my router. Exactly where did you make this change?

I am also experiencing similar issues in the same kind of setup, GigaPower modem slaved to an Apple branded router. Where exactly did you make this config change in the Admin UI?

Can you please go into more detail on this fix? Specifically this part "To fix this issue, I set the external IP address of my router/firewall to static and my DirecTV services have worked perfectly ever since."

I would also like specific details on this IP address fix. Thank you.

Setting his router/firewall interface to “static” means that he is assigning the edge interface between his ATT modem/router a specific IP address.

The alternative is allowing a DHCP IP address to be dynamically assigned to the interface by the ISP equipment. The pass through setting on the ATT modem/router allows him to use his own router behind the ISP provided equipment. The problem herein is that the DHCP lease - the period of time for which a dynamically assigned IP address will be assigned - is expiring and causing a brief “blip” in communications. Unfortunately, this very brief interruption is enough to cause playback issues.

To try the solution, you’ll want to login to your router and take a look at the IP address on the Internet connection - if the ISP modem/router is in pass-through mode, make note of the IP address being used for your internet connection - this will be your DHCP assigned address from the ISP, and you set the IP to static and simply re-use the IP address you noted. You’ll also want to make note of the subnet mask and ATT modem/router interface IP (gateway for your  router). You’ll likely have to input a primary and secondary DNS server, use the modem/router interface IP and a backup like Google’s DNS servers (8.8.8.8 or 8.8.4.4) for your secondary DNS server.

I have been having the same issue while trying to download programs from on demand. After a few minutes of downloading a show I get "problem connecting to directv try again later". I have addressed the situation with directv reps on several occasions and I get the run around from them. I am very frustrated and have started looking at Comcast/Infinity for cable service.

I had a similar problem with my uverse setup and it turned out that the ATT Gateway (Pace 5268) doesn't pass through the IPv6 multicast information on through to the second router.  After researching I decided to separate the TV traffic from my home network by using vlans.

I guess add this to the list of things that don't work consistently on the new User Interface.

I also have the "Problem connecting to DirecTV" when trying to watch a show from the start.

The DVR however checks out OK on the menus when testing Internet connection and speed so the DVR is "seeing" the Internet in order to run those tests , but no ability to stream the shows .....

DirecTV , this is nut's , so many of your products "Features" just DON'T WORK as they should (and did) before you changed the software.....

and NO , I haven't rebooted my box because it's currently recording 3 programs and I don't want to loose those shows ...

Have they fixed your issues yet? I have the same issue!