DirecTV Scam Promotion for Signing up with AT&T Wireless

Recently I was offered a promotion as a DirecTV customer that if I returned to AT&T wireless I would be given a $300 gift card and $100 bill credit per line. I was also told the activation fee would be waived. When I received my first bill none of this was reflected. I called AT&T to resolve and they made a big production about waiving the activation fee, but did credit my account.

As for the gift card and the bill credits, I have spend over 4 hours on the phone and spoke with 15 different people from AT&T Wireless Customer Service, DirectTV Customer Service, AT&T Rewards Center, AT&T Wireless Promotions and other random departments. All of these individuals say it is not their department that handles this and that they need to transfer me to someone else. Wireless claims it is a DirecTV promotion as it was on their site. DirecTV says it is an AT&T promotion as it involves credits for the ported cell numbers. The Rewards Center and the Wireless Promotions people seem to only know their programs and since I am not in their system they can't help.

I made the switch because they were offering me $500 in promotions, plus a BOGO for iPhone 8s. It is to late to just chuck the service and go back to the old provider. After looking online there are over 15,000 complaints about AT&T not honoring their promised promotions. I am wondering if I need to report this to the Ohio Attorney General's fraud department. Anyone have any success with doing something similar or were you able to get AT&T to honor the promotion they offered  you when you signed up?

This is ridiculous and of course I did not take screen shots of the promotion. Didn't think I would need to as it was splashed all over the DirecTV screen from over a month.

Would just like AT&T and DirecTV to honor their promotion!

hello, as i'm in sales for DTV i know exactly what you are talking about. in the original order confirmation there will be a link provided on how to claim the $200 visa reward card. The $100 one is seperate as it was a bonus promotion for the past 2 weeks.

So please check your original email, the one they sent you the day of the phone call sale. Then visit the website above and fill out the details.

I went back and looked at that email, but there is nothing in it regarding the rewards. I am still working with customer support and they have no idea and can't find the promotion. They are amazed that someone there knows what I am talking about. Again, none of the emails I received on the 6th have the link you mentioned. Any help you can provide would be appreciated

please visit - https://rewardcenter.att.com/home.aspx - Fill it out. let me know how you go.

The system won't recognize my account number. The phone rep that has been speaking with "upper management" says this is only for new DirecTV customers. I was specifically offered this as an existing DirecTV customer. Continues to seem like all they want to do is keep from paying out the promotions they promise. This forum is filled with others who are being scammed.

Just a note... this is definitely not resolved. Still owed $500

The $500 you speak of is via AT&T wireless, i have provided everything needed for Directv.

The interesting thing is that AT&T Wireless says the same thing only in reverse. They claim it is a DirecTV promotion. Again, seems like AT&T is working very hard not to pay these out

Ok can you please make a list of all the promotions you are expecting to get. break them down. and ill try my best to tell you which department is which when hunting the promos down.

Sure I was told as an established DirecTV customer that if I came back to AT&T Wireless I would be given a $300 gift card and then $100 bill credits for each line that was brought back to AT&T. This is clearly spelled out on my first message in this thread. I was on the phone for over 5 hours the other day with no resolution. I was told a manager would be calling me back. Surprise! No one has called. When I signed up I verbally confirmed the promotion and verified I was eligible. I was not expected to turn in my old phones to get the credits or the gift card. I spoke with an AT&T rep that confirmed the promotion and promised all of the above. Now, everyone plays dumb.

Same issue! I’m still owed $200 in Rewards and dvr service for a year (which was part of the ORIGINAL

offer I signed up for). I’ve been trying since April to get answers. I swear I’ve talked to everyone in every department of both directv and att and I wrote into the legal department I. May (as recommended by a directv employee). Still nothing. I last spoke to a manager in July who supposedly noted in my account to have someone call me. I original thought it was a mistake but now it’s very clear that I was lied to and made promises in order to get me to sign up without any intention of following through.

I had a rough morning. So I called 1800-288-2020 to settle an existing bill which was taken cared of. However, I needed to access my account online to see the breakdown and register for auto payment and manage my account. So she gave me a number to call to help me with my concern: 18772672230. It was an out of the country support and he told me to bare with him so he can verify my account info. Asked for everything including credit card number, and told me his Supervisor will talk to me to verify everything with voice automated prompts and I’ll need to say yes or no on my end. After 2 verifications w 2 people and voice prompts, I was asked about vitamins if I want to subscribe to it. I told the supervisor to not do this, skip this and just help me access my account online for me to manage it. He kept insisting to listen to him and just to answer the question and I kept telling him I AM NOT INTERESTED WITH VITAMINS BUT JUST HELP ME WITH WHAT I CALLED FOR. To make it short, I eventually answered no to the questions and the end, he told me to call 18003733411 and give my first and last name and they will help me. What the heck??? After spending more than 30 min, I still need to call another number??? So I did, I called the 800 number and it says about All State insurance and asked if it’s business or residential. So I gave it a try, asked for my last name and spell the first 3 letters and I did. But It could not find my last name. Spent my 1.5 hrs for nothing. Went for AT&T Chat online and kept transferring me to 4 different support personnel and I quit. Went to a nearest AT&T store (Hillsdale in San Jose) to seek for support and I was told that they couldn’t help me with my direct tv concern but to call 18002882020 to address the matter. I give up

I also have had the same results trying to get AT&T to fulfill the terms of their original HBO for life promo that appeared as a link from the DirecTV site back to the att.com/shop/ site in May.  The promo was to get HBO for Life and also receive a $200 per line credit for switching from my current wireless carrier to AT&T.  The HBO part was activated right away. Unfortunately, I've invested over 10 hours  recently calling every possible AT&T department trying to track down my $800 credit for the 4 lines that I switched. AT&T support sends you into an infinite loop where each department transfers you to another until you end up back where you started.

The crazy thing is that that I had the foresight to take screen shots of the original promotion and I saved a copy of the email from at&t  confirming the discounts and credits I would receive.  I have requested that they enter a support ticket and I will send them my proof of purchase documentation. So far, it seems easier for each department to say that it isn't there problem and they additionally say that say I can't send my documentation to anyone at at&t for security reasons.

It seems it should be simple for someone at at&t to confirm their "HBO for Life"  promo that they offered via the web back in May 2018 and give me the name of some person to resolve this.

If at&t won't accepts my proof of purchase documentation, at least it will be useful if it comes down to reporting consumer fraud to the FTC, BBB and my state attorney general.  I really hope that it doesn't have to come to this or purchasing three very big billboards.

You indicated that you could identify the correct department to speak with at AT&T for the credit that was  supposed to occur for switching from my current carrier to AT&T.   My HBO for Life promo promised $200 per line up to 6 lines. I switched 4 lines and received an email from AT&T that confirmed this would be an $800 credit to my account.

DirecTV fulfilled their part of the promo - I've seen the $15 recurring credit and HBO was activated.  My issues is not receiving the $800 credit from AT&T for switching my wireless service.

Here are the screenshots for the original May 2018 web offer.   This should help you track this down. The full url is shown below. 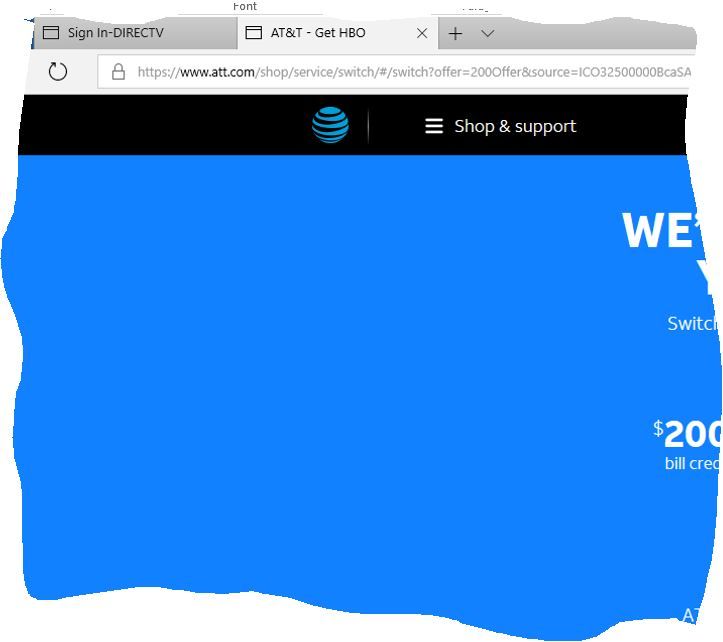 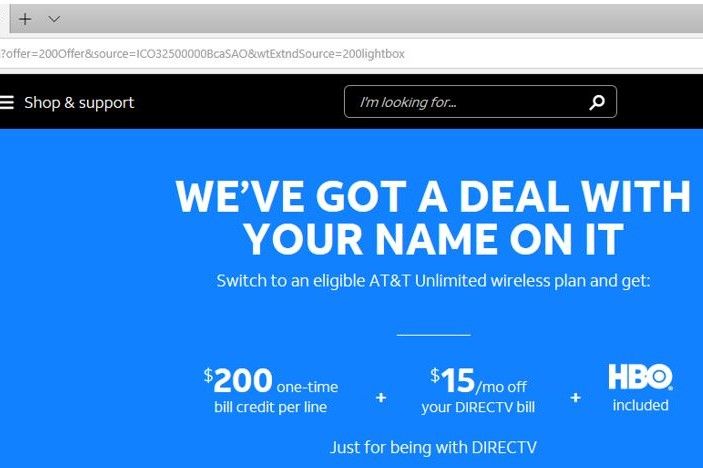 Here are AT&T departments and numbers I have tried but each one states they have had nothing to do with this promo. Most certainly this was a joint DirecTV and AT&T promotion and it is AT&T that is not honoring their part of it.

Each agent contacted pushes you to the next department.  The most frustrating thing is being told that a Supervisor will call you back and this never occurs. These are systemic issues that AT&T Management should take very seriously and should take actions to resolve.

Please tgreaves, you help would be most greatly appreciated here.

This EXACT situation happened to us. I have spent hours on the phone and finally got someone to acknowledge the credit I was promised, only to tell me her boss would be in contact with me, which never happened. Another month has passed and no contact from AT&T. Complete scam.

I am on the phone, as I type this, for the millionth time trying to resolve the same issue! I was promised $200 credit for 5 lines... same promotion.  Then, when my bill quote was higher than promised, I was offered another $50 per line. I was told I could begin collecting the $1250 credit (5 lines) after 45 days with the plan. I haven't seen a dime. I am beyond frustrated and feel completely scammed. I have devoted countless hours on the phone to no avail. I am bounced back from ATT to Direct TV every time I call. As a customer of Direct TV for over 20 years, I am beyond disappointed. My 'ticket' is still being 'looked at' ... since August, but I have a feeling I won't see a cent. Time to call 7 on Your Side. 😞