If you own a Samsung S8 starting with model number G955U or G950U, and you have received a text/letter from AT&T saying they will disconnect you in February for using a 3G phone, take note.

FIRST: Your phone is 4G and should is supported. Samsung has confirmed this for me and showed me an AT&T web page that doubly confirms it (see https://www.att.com/device-support/article/wireless/KM1273778/Samsung/SamsungG955U/).

SECOND: AT&T is ignoring complaints about unilaterally disconnecting 4G phones under the guise of dropping 3G service. Some are speculating that AT&T is railroading you into upgrading your phone when it is not necessary.

THIRD: You should make your concerns heard by the following interested parties:

SAMSUNG: They should be concerned that AT&T is misinforming customers about Samsung product capabilities. Here is a shortcut to voicing your concern https://www.samsung.com/us/support/contact/?model=N0022597&topic=SYM0000442

FTC: Since AT&T is providing customers fraudulent information, telling the Federal Trade Commission about it will get a response. Visit https://reportfraud.ftc.gov/#/form/main?pid=B

FCC: Since AT&T rents the public airwaves, and since the FCC has many consumer protection rules, they too should be made aware at https://consumercomplaints.fcc.gov/hc/en-us/requests/new?ticket_form_id=39744

Be sure to note that (a) you have a 4G phone, (b) AT&T is incorrectly identifying it as 3G and (c) is preparing to kill your service in February (and maybe scaring you into upgrading).

@guyshomenet2  Do not know if this pertains to your phone or not.  Article on Galaxy S8 pertaining to HD voice and VoLTE for Verizon but instructions should be the same for any S8. Take a look at your settings.

The SIM is likely five years old. I hesitate making a special trip to AT&T to upgrade the SIM only to discover that AT&T and Samsung never bothered to engineer the software fix for HD Voice (still hoping there is a way to know if such a patch was made and installed).

Thank you for providing that clarification on your phone, @guyshomenet2!

Since your phone is listed among those that are compatible to work on our network then there is no need to upgrade the device or SIM card, if you have a compatible SIM card.

We invite you to visit your nearest AT&T Store to obtain a replacement SIM. It is likely that the list was recently updated to include some devices and your exact make and model was added.

If you haven't already, you may need to perform a software update to enable HD Voice, Wi-Fi Calling, Video Call, Advanced Messaging or 5G services. To get started, visit our Device Support center and select your device's make and model.

We hope this info helps. Enjoy the rest of your day!

ATTHelp, this is incomplete and unHELPful.

AT&T is sending me letters saying I WILL be unplugged. Assurances that the " phone is listed" appear to be incomplete. As the other threads show, this may be an unbranded phone issue and I think your whitelist is branded phones only.

I need AT&T engineering to confirm that the unbranded G950U1: 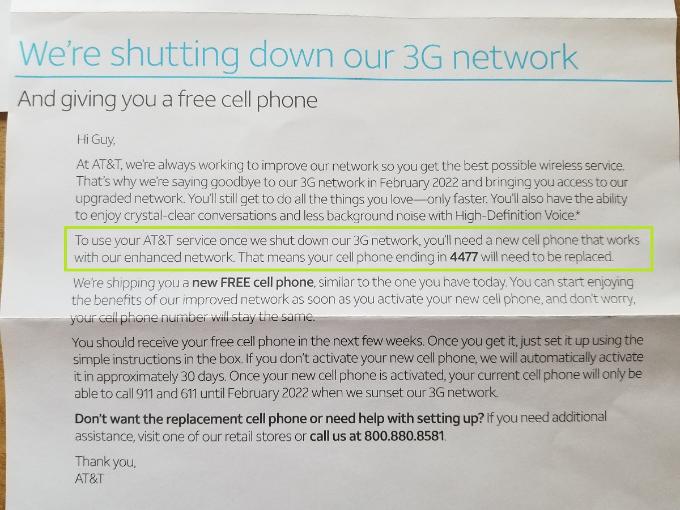 Thanks for your response and we can certainly understand your frustrations, @guyshomenet2.

You'll need to make sure that your device is updated to the latest software version, which is Android 9.0. Please be advised:

To process your software update, do the following:

To confirm, that your device has been updated you'll need to:

Also, you'll need to proceed with replacing your SIM card as well, as Lar stated. This will confirm if it's a concern with your SIM or not. Feel free to let us know and keep us updated!

I'm beginning to think that ATTHelp is an oxymoron.

Stated previously, phone is constantly updated. Android 9, yes. But this does NOT confirm if AT&T and Samsung developed and distributed the patch to support HD Voice on 4G.

So, ATT "Help", bring your engineering team into this conversation as you are not providing the level of support required.

Thanks for letting us know, @guyshomenet2.

Since you've revealed that your device is a G950U1 model, you'll need to review our updated list of devices that'll work on our network after the 3G shutdown. We've confirmed that the non AT&T branded version is not eligible for use, and you'll need to upgrade your device as stated in the letter you received.

We do apologize for this inconvenience to you and let us know if you have any further questions or concerns.

Well now that I got to the end I was going to ask if the phone was a 950U1 but it finally got brought up.  The * is not a wild card its about the update needed from other carriers.

ATTHelp, the model number is not listed on the document you provided. Am I to take this as a final declaration that the unbranded G950U1 will not be supported, despite Samsung saying it is fully 4G compatible? If so, I'll report such to Samsung who has a vested interest in the brand-destroying decision.

Also, suggesting I wait until 3G is dead and then check a compatibility list is silly.

WHAT I NEED FROM AT&T is a definitive/blunt declaration that the G950U1 cannot be supported on the 4G network (not a series of half statements such as AT&T have delivered thus far).