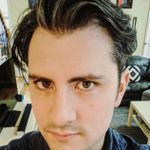 Why is ATT disabling visual voicemail on Pixel phones?

So my girlfriend just got her brand new pixel 3, unlocked straight from google. We have friends who are on Verizon who also did the same (went the unlocked route, and bought directly from google as well.)

However, in the dialer app, we noticed something strange: our friends phones had a dedicated tab for visual voicemail; my girlfriends phone did not.

The only option we have is to download att's proprietary visual voicemail application...even though google builds visual voicemail in natively into android, much like apple does with the iphone.

If i bought an unlocked iphone, apple's visual voicemail solution would still be accessible to us. In fact, I know it is, because I've purchased and used unlocked iphones in the past on my account without any sort of barrier to using that portion of the phone....the option to enable visual voicemail on her pixel is totally missing from her phones options, which means that its being disabled based upon the sim that's currently inserted into the phone.

I have a well over 200 dollar phone bill with att.....and I'm kinda starting to get the gist of whats going on here, but I'd like to see if there is solution to the problem...I mean for that price, or any price, does it not make sense that if we spend money on a device that we get to use its built in capabilities?

Why is att going out of their way to disable this? Where do i sign to get that ban lifted? And is there any reasoning behind that decision, outside of wanting unnecessary amounts of control on android devices on att's network? (because they certainly don't take the same approach to iphones)

So, @GLIMMERMAN76 , any tips on how to "reset it", on a non-branded phone?  I still can't get it to work, with ANY consistency, on any of our OP phones.

We're lucky if it even issues a notification, for the VM, and the translation part (the whole point of VVM, right?), is maybe 1/20 calls now.  Sometimes, if I open the ATT VVM app, and refresh it, several times, it'll do the translation, maybe, if I didn't cross paths with a black-cat or something that day ;-]

@eldaino 100% agree, it'd be nice if ATT allowed a LOT of so-called "Advanced Features", with those of us on BYOD devices, I'm a 21-year ATT customer now, yeah...

***** yeah!  100% what eldaino said.  There is no excuse for this AT&T, and the fact that you are dodging the question shows a complete lack of respect for your customers.  You should respect your customers more.  Don't try to force your app for checking voice mail just because you want to make a quick buck somehow.  Making that buck will cost you millions of other bucks.  Bears and bulls both make money.  Chickens and pigs get slaughtered.  Don't be a pig, AT&T.

@whateverpiggy I would perhaps "check your language aspect here", given that these are "moderated and all-user-friendly forums", but otherwise, yep, this is one of the reasons I'm no longer with AT&T.

I now have "all but one of these features discussed here", on another carrier, all three of the same *exact* (unlocked/unbranded) devices.

Over a year later and still no answer to a question that has 75 comments. I would be embarrassed if I were att and @ATTCares

Also, can we all appreciate the irony of an account named "ATTCares" responding to the question with a non-answer, watching 75 comments get made, then marking their non-answer as "Accepted"?


Over a year later and still no answer to a question that has 75 comments. I would be embarrassed if I were att and @ATTCares

Why do you need an official reply?   AT&T does it their way, always has, and it’s not going to change for a phone they aren’t profiting off.

There was an official reply, but it intentionally danced around the actual question.  Just today, they marked the non-answer as the accepted solution even though the original poster said in his next reply that it doesn't answer the question.

I'm just saying that, if I were the @ATTHelp official account, I would be embarrassed that I intentionally dodged the question on one of the largest threads on the community, then had the gall to mark it as the approved solution after 75 other people have replied that they didn't actually answer the question.

In terms of them but supporting a phone that doesn't make them money, it actually took them more effort to turn off Google VVM. If they had done nothing to the stock Pixel, it would just work. They went through extra effort to turn it off to force customers to use their own inferior app.

They aren’t in the slightest embarrassed.  And a politic reply is all they ever give.  That’s why customer forums exist, to discuss realistically, rather than just company spin.
This thread isn’t even in the top 10 longest threads.  Unlocking thread is closing in on 3,000 posts.  The threads on the group text limit are long and go back years.  This thread hasn’t hit 100.
There are bigger issues than VVM that need to be addressed by AT&T in regards to unlocked phones.  At least the VVM app works.  But there is no workaround provided for those who can’t use WiFi calling.  In order of importance, WiFi calling trumps VVM and the group text limit.
At&t definitely has major flaws that it needs to iron out to stay in 2nd place.   But they seem to have blinders on.

Adding myself to this forum.

I would prefer to use Google Pixel's voice mail feature. Instead, I am forced to delete the AT&T Visual Voicemail app, go to the play store and rate it 1 star, then download "YouMail".

I at least will be switching to Verizon and I don't have to worry about this (Edited per community guidelines).

I too think it is ridiculous how they treat phones not purchased from them. I just bought an unlocked Pixel 4 xl (G020J) because it not only saved me a couple hundred bucks from their price, it is unlocked so I can take it to another carrier. It is the same model they sell in stores but since the IMEI is not one of their own, they block a bunch of important features. Not allowing features just pushes the customers to go spend their money elsewhere. So not only do they lose the opportunity to make money on a phone, they also lose subscribers to their overpriced service to other services that don't block features. Seems to me like a losing position to be in.

I did discover from a post elsewhere that if you change the IMEI they have listed for your phone in the system to one from a supported phone like one of their iphones, you can use some of the features. My HD voice started working and my wifi calling started working by doing this. I still don't have android VVM working and now their VVM app doesn't work either. Also, my call screening is still not working. It is so irritating to spend nearly a grand on a phone that has all the most important features disabled by the carrier. Considering Verizon at this point.

Hello, I wanted to let you know that as of January 2021, AT&T Visual Voicemail will sync with Google Pixel phones in the native dialer under the Voicemail tab!

Transcription doesn't appear to be there, but you can pull up your voicemails. For me it didn't work until I deleted the separate AT&T Visual Voicemail app, but I'm not sure if that actually helped or if it was just timing.

Also, one more thing: as of right you need to be on the Google Phone beta app to get it.

Thank you for the replies. After reading them, I had a look at my dialer app and sure enough. The voicemail option is there.  I uninstalled the AT&T VM app a while back because I got tired of the notifications. It was always telling me I had a new voicemail which I didn't. It was always the welcome voicemail.  I kept deleting it but it kept coming back.  So.... I uninstalled and started using Google voice visual voicemail.

Hopefully they add visual soon since I am paying for it.