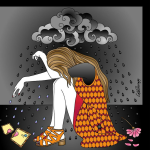 No Communication Between Companies After Merger

I have been a loyal customer of AT&T for nearly 10 years. In January 2017, I decided to bundle my cellular data with DirecTV and U-verse. Since that time I have made 16 phone calls, spoken with 12 different customer service representatives, spent 439 minutes, which equals 7.31 hours of unpaid work time, disputing incorrect claims on my bill. It took four months for me to finally get an answer today (maybe). The problem with the system is that when a customer calls the AT&T 611 phone number, the customer service representative cannot see notes that U-verse or DirecTV have made. I was quoted $150 from a DirecTV representative on January 14th 2017. I looked at my bill one week ago and it was almost $800. So, after nearly eight hours of holding or talking to customer service reps in multiple departments, and having my phone, internet, and cable shut off 3 times due to non-payment of a bill that was incorrect, I MAY have finally gotten a resolution. Who is going to compensate me for the nearly full day of work that I have missed trying to get my AT&T issues resolved? Is there a dispute Department that will compensate me for time lost and anger that I have ensued because of threatening phone calls from AT&T, U-verse, and DirecTV threatening to turn off my service? After all is said and done, my bill is still higher than what I was promised to begin with. I am a single mother of three children and this is unacceptable. Absolutely, unequivocally, unacceptable! If I could, I would speak directly with the CEO of AT&T and ask he or she how it would feel to be unable to reach your children because your phone was disconnected due to incorrect billing. I am one very unsatisfied customer. I have never seen this kind of service from any company ever in my life.