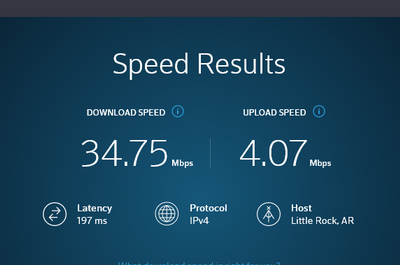 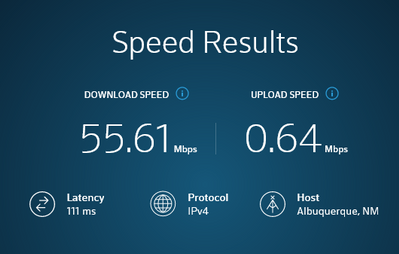 I'm currently on the 18MB plan, but I would like faster speeds as long as it is fairly consistent.  I ordered internet for my grand daughter today and asked if it would be 18MB and they said it would be up to 50 MB.  I asked if I could get that also and was told that isn't available at my address (I live a 4 or 5 blocks from my grand daughter). Here are two speed tests that I ran while also streaming video.  The speeds are not consistent but are commonly around what they show.  I have been up as high as 71MB down and 6MB up. A tech came out a few months ago and said I probably had the best line in town that he has seen.

Any idea how to convince AT&T that I could upgrade?

If those are your results on the 18 MB plan, enjoy.  They'd probably only be charging you more for the same speed.

Note, however, you shouldn't run speed tests while streaming video, you should run speed tests when nothing else is going on.  And the servers you connected to are not near each other, so at least one (if not both) is geographically far away from you; you should try to get a test server within 100 miles of your home.

For grins and giggles, go to your gateway's configuration pages at http://192.168.1.254 , click on the broadband tab and look for the statistic table with sync rates, attenuation, SNR, etc.  Copy and paste that information into a reply here.