AT&T Holiday Deals & Gifts - Don't miss these holiday deals on the latest devices!
Need help with your equipment?
Get started 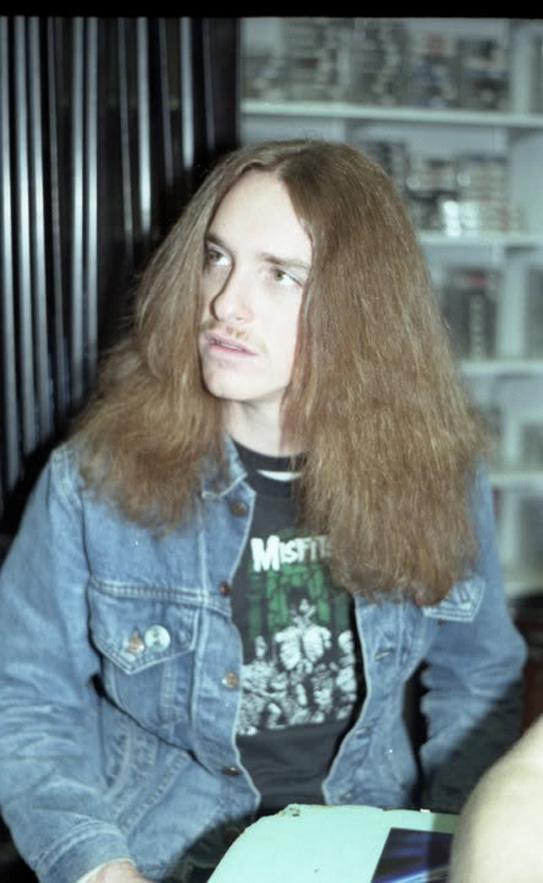 We've had this issue since MAY of this year. The wifi will go out for a minute or two several times a day and it's extremely annoying. They have sent out NINE techs and all of which were totally useless. I've heard that it's a bird's nest in the outside box, I've heard that it's my equipment inside, I've heard that it could be an old school radio somewhere in the neighborhood affecting it. No one knows how to help us and no one seems to know what the issue is!

I was told that if we had fiber (because we have an old DSL) we wouldn't be having this issue....but AT&T refuses to install it for us!!

After a little over two weeks of peace for once, it started again. I'm afraid to call for help because the last time they sent out a tech, I was hit with a $99 fee (for no reason because there was nothing wrong inside) Every time I call and try to ask how to sign up for fiber, they dodge the question and try to get me to sign up for internet 12 (we have internet 6) The first tech was the one who told me we can't do higher speed internet at my house because it is "just a few feet" outside of the box's range (or something like that, i didnt really understand?)

I FEEL LIKE IM BEING SCAMMED HERE. Has anyone experienced anything like this? What do I have to do to get this resolved because I'm tired of the useless technicians. (The last guy literally came in and said he has no idea what it is 🤷) idk what to do anymore. Anyone I complain to says they will finally fix it and they never do 🤦‍♂️

You say your "Wi-Fi" goes out.  If, by that, you mean your Internet service, I wish you would say so.  Those are two different things.

So, assuming that is what you mean (based on everything else you've said), upgrading would only be a [partial] solution if your problem is because you're choking your upload pipe, vs a line issue.  If your problem is a line issue (which seems more probable), then upping the speed would cause more downtime.

What model modem/Gateway do you have?

Honestly I'm not too sure which it is. The broadband light will start blinking green when it goes out, sometimes it will go red, but not always.

"Intenet connection issue NAD-3302" is what my phone will say every time it can't connect. Honestly it shouldn't distress me this much...but reconnecting wifi over and over and over is getting old lol. Not to mention you never know when it's gonna happen. It went out 6 times in 10 minutes once.

The model is BGW210-700 if that helps. They just sent us a brand new one a few months ago.

They always say it's a line issue and they send a tech, but then the tech says they can't do much and have to forward our issue to the "special line techs" that never contact us or even do anything to help.

Yes, all that helps.  Getting an NAD-3302 error means that your Gateway lost connection to the AT&T Network, which means any Internet access in your home (whether connected directly via Ethernet, or Wirelessly via Wi-Fi) would have been down.

The BGW210 means that you can do the following to get more information about your line.  Go to http://192.168.1.254/ in your browser, click on the Broadband tab.  Make a screen capture of all the information on that tab (blot out your pubic IP address and MAC address if you wish).  And also provide the Time Since Last Booted on the Device > System Information tab.  With this information we can look at the line quality and make recommendations.

In order for us to continue helping you, we will need to speak in a private chat via the direct message inbox located in the top right corner of the screen.

Hope to see you there! 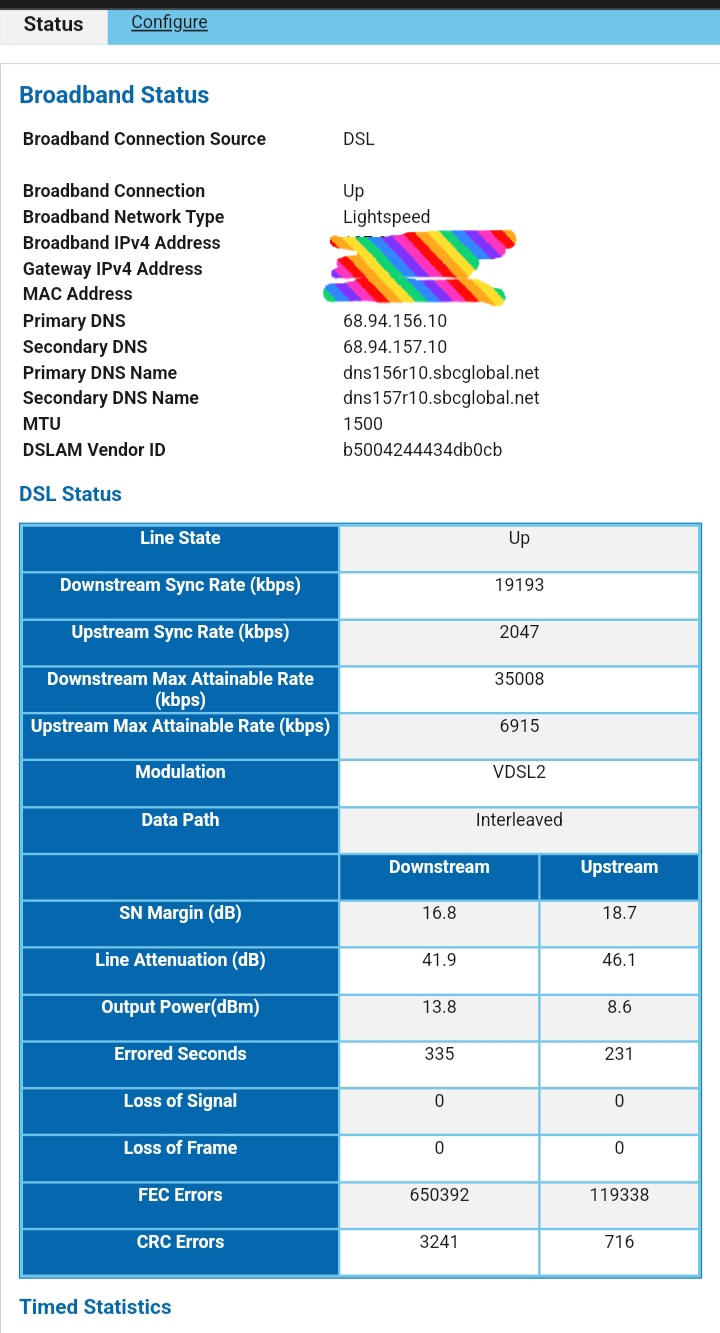 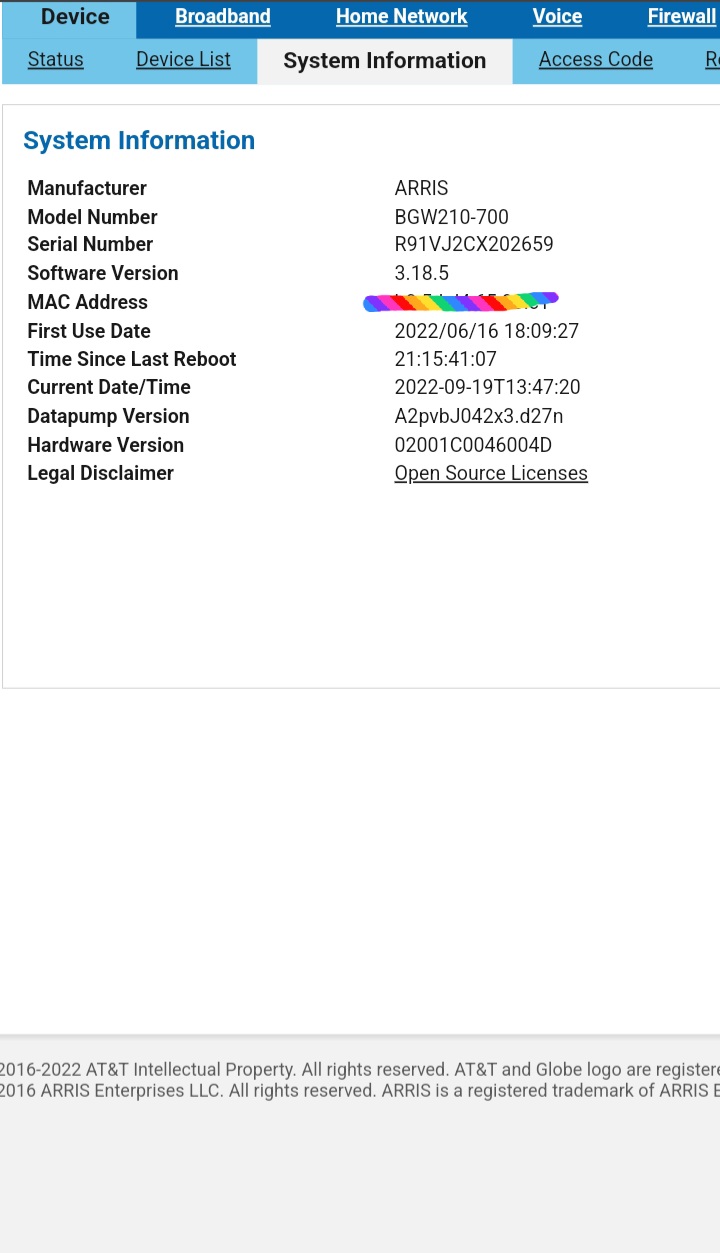 Pardon me, i'm not sure if I blocked out the right addresses, I hope I did 😬

You may be paying for Internet 6, but you're configured as if you had Internet 18 (your sync rates are 19.2 down / 2 Mbps up).  While your attenuation is high, your margin looks good, you've got loads of headroom (i.e. max sync is much higher than sync), but:

You have unacceptably high errors.  150 FEC/minute (50% higher than the threshold), and significant CRCs (more than a handful indicates a problem).

And this is likely the cause of much of your issues.  The problem is what causes the errors.  It's either intermittent interference (a pump turns on, the blower motor on your AC turns on, the old school radio, etc.), crosstalk from a neighboring pair in your bundle, or your Gateway or the line card in the VRAD you're attached to has an issue.

Do you have an old AM radio that you can use as a diagnostic tool?

Oh wow, a blast from the past!  I'd forgotten walking around a client's business with a radio tuned off band to try and find the noisy device killing their DSL.  Gym next door, treadmill right on the other side of the wall.

Shoot. To your questions, the gateway has been replaced, yes. It was moved to another port, yes. But no...I don't have an old radio that I could try. My mom says one of the neighbors might have baby monitors...would that cause interruptions?

The baby monitor could do what we're seeing only if it's badly malfunctioning.  The frequencies that it should be working at are much higher than the ones VDSL2 uses.

You may have similar, or completely different, problems with another service, but you won't have the same problem.  But you might not be able to tell the problems apart.  If they've made that many visits to your home, it looks like they're trying, but they may not be seeing the interference while they're there; intermittent issues are the hardest things to fix.