So, yesterday I upgraded to the Power teir exclusivly for the upload jump. I orignally had the 24-3 plan that was actualy giving me about 25-3.5. Yestarday the tech came out to install the new system and after 7 hours of work (actually) and numerous errors on AT&T's back end (port and profile provisioning) he finally got it working.

Only issue was that there were lots of FEC Errors and the speeds were about 45-4 (of which it should be (45-6). Seeing as I just went through this circus and agreed to pay more and probably tie mysef into UVerse for another few years I was not thrilled about the .5 upload jump.

The tech that did the instalation made sure that a line technition (deals with outside of home) would come out the next day and try and imporve the upload speed and FEC Errors. Sure enough the tech comes out, but he only works on the main box down the block and not the connections next to the home. This led to a decrease in FEC Errors and slight bump of upload, but still no cigar.

In response I called technical support and after they begged for me to give AT&T another chance, they schedued a tech to come out 4 or so hours later. This tech looked at the AT&T box by the home and explained that it was a mess that needed fixing - and that the line tech that had come out earlier in the day noted that there was no access to the house, so he couldn't of done it then... Even after I had physically walked down the street to the main box and had a converastion with him earlier in the day. Needless to say he actually lied about his inability to do work.

So, after about 2 hours with the 3rd technician who did a wonderful job of making my home connection look nice, I'm pulling about 46-4.7. After doing some research online it seems that most people get an upload speed of 5.7 conservativly.

I called tech support again and they said they couldn't help me. They guy actually said that AT&T will stand by its download speed promises but not so much its upload. He also tried to convince me that 4.5 was good enough for me. No offense to him, but really? Not the right avenue to be taking.

After at least 11 hours dealing with UVerse over the past two days my upload speed has seen about a 1mb jump. I feel like I'm being cheated and that AT&T is either lying about their serivce, or that nobody I've been in contact with really cares.

The modem has been running for about an hour since the 3rd tech left. Here are the stats and speedtest. Am I off my rocker or is AT&T dropping the ball and probably a customer? I ran from Comcast because of the customer service and reliability, but it seems that Uverse has finally matched them. Might as well go for cheaper/ faster when reliability and service are the same. 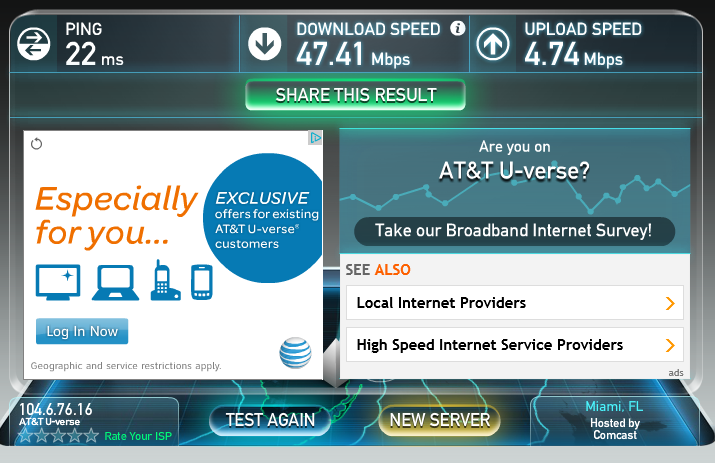