I recently signed up for U-Verse Gigapower and have the Pace 5268AC gateway.  I also have an Apple Airport Extreme. I want to configure the AE in bridge mode and use the AE wireless and disable the wireless on the 5268, but let it do DHCP.  The goal is to create a single network whether connectivity is via Ethernet or wireless.  I tried this past weekend to get that to work with no success. I could get Ethernet via the 5268 to work, but could not get the AE wireless to stay up and allow endpoints to connect.

The only issue I have is I now have effectively two networks. The 192.168.1.x wired network that is served by the 5268 when I plug things in via Ethernet and a 10.0.1.x wireless network when devices connect wirelessly.  This normally wouldnt be a big deal, but now I have some devices wired (I have Ethernet drops in each room of the house that go to a Gigabit switch in the garage) on one network and some wireless on another and now things like Sonos, Plex, and potentially other services are not able to connect.

I want to go back and re-try the originally attempted configuration where the AE is simply a passthru and provides the wireless connectivity in the home and everything whether wired or not is on the same network.  Any suggestions on the steps to configure this way?  Would this be the correct configuration on both devices to try?

- What else am I missing? Do I need to do anything with DMZ Plus, etc?

- What should I set for Internet settings (connect via DHCP?, what about IPV6?)

- Any other settings I am missing?

Also, is there a certain ordering sequence that the config should be performed?  I burned the whole weekend trying to get my original configuration to work.  I want to make sure I get it right this time.

Use the previous steps with Internet > 5268 AC Gateway (LAN Interface) > Airport Extreme (LAN interface) without the gigaswitch to see if that corrects the performance issue.

We are sorry about the issues, but we will be glad to help. There may be too much activity for the U-verse gateway and that is why the connection is dropping. The gateway was made for internet support but not to operate an internal home network. Try testing without the Apple Airport Extreme to see if you are having the same issue.

The best thing you can do is to move all your non-U-verse equipment to your Apple Airport, so that the wired and wireless connections are on the same network.

Thank you for your response ATTCares.  Given the current configuration I shared, what would it take to move all non U-Verse equiment to my Apple Airport extreme?

Would this start by changing the cabling from the WAN interface over to the LAN interface?  So the new config would look like this?

For the AE config, would I then need to change it from DHCP + NAT to Off / Bridge Mode?  And what about the setting on the 5268?  Do I remove the DMZ Plus configuration I have in place for my 5268?  Here is a photo of the current 5268 cabling.

The blue cable goes to a LAN port on the GigE switch and the yellow cable comes directly from the broadband link. The Airport Extreme is then connected via the LAN interface to an Ethernet jack that goes to the switch in the garage. 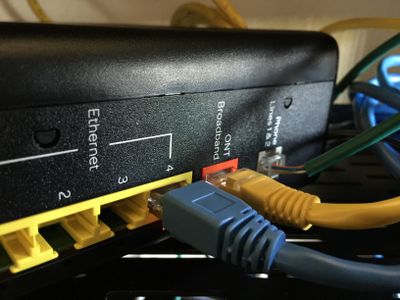 Please advise.  I want to make sure I have this right before I start changing things.

Here are steps to take to configure your setup:

That should provide a good setup and let us know if any additional questions.

I spoke too soon.  My wifi performance has plummeted from 400+ Mbps to 1Mbps.  I went ahead and went back to the origibal configuration I had before until I have time to troubleshoot further.

Let us know how it goes. Also, we understand that your current setup creates 2 networks. Is there any reason why everything cannot just be put behind your AE? You would still have 2 networks but everything would operate under your AE and the U-verse Gateway network would have nothing on it besides the AE.

I have no problem putting everything behind my AE.  The question is how do I do this given my configuration I shared in this thread?  I tried your steps previously and had the performance issues.  To re-iterate, here is my current physical setup:

For the above setup, both the 5268AC and gigabit switch are in the garage.  The AE is in the house and connected via ethernet to the wall, which goes to the gigabit switch.

If you have specific steps to get everything behind my AE, I wouild love to try.

Please confirm and I could give that a shot.  Also, what would the configuration then be for that setup?  Does that change anything?

Speed and connectivity and is great with the current setup, but now my Sonos, Plex, and Survelliance Cameras don't work remotely.  I need to fix this as soon as possible.

Yes, that would make a big difference.

You do not want your Wireless Router (or access point) attached to the same port (through a switch) as any U-verse IPTV equipment.

That worked! Connecting my Airport Extreme to the 5268AC directly without going through a switch seems to have fixed the performance issues.  I now have the AE in bridge mode, gave the AE a fixed IP address outside the DHCP range of the 5268AC and things are dandy as far as speed and connectivity.  Only been an hour or so, but looking good so far.

I am having similar issues and I want to check in to see if you have had any further issues with Uverse disconnecting after setting the Airport Extreme as your primary wifi source?

Have you disabled the wireless on the U-verse gateway? If not, go ahead and do so, as there might be interference between the 2 devices. Since the Wifi is going through your AE, you do not need the U-verse gateway to broadcast the Wifi.

I have a very similar configuration except I use the AE as my router (wired and wireless) and the gateway has my router on the DMZ plus list with no firewall. I'm having major issues with my Xbox and iOS devices. XBox interface is really slow to load. I've had to add portforwarding entries for the xBox which I didn't have to do with Comcast. But it is still not quite right. Internet pages on my iPad load in a patchwork of pieces and some images don't ever load. I was able to adjust my laptops to max MTU of 1472 and now pages load as expected. I'm guessing that the MTU is the issue, but you can't adjust MTU on iOS devices or the Xbox one. My AE is the exact same router I used with Comcast, so I'm certain the issue is with the gateway config. What can I do?

Do you have the same issue when connecting directly to the U-verse gateway. If not, then it may be an issue with the configuration of the AE. If so, you can try making adjustments on the U-verse gateway, such as changing the MTU.

If you had to change your MTU, then that points to you using IPv6, which AT&T U-verse implements via tunneling (reducing the MTU available).  You might want to turn off IPv6.