First things first, check out "what is acceptable latency" if you are not familiar with latency. Below that you will find some information regarding some of the causes of latency

What is acceptable latency?

AT&T's Internet Network does not place priority on ping. Ping results may be delayed and elevated due to hops not responding to the ICMP protocol of Ping. Also, some sites do not ping at the same rate. AT&T will investigate latency over 400ms.

Rule out the causes of high latency

Heads Up: If you run a traceroute on a site that is out of country, high latency is normal. Keep in mind, some sites do not allow you to run traceroutes.

Traceroute is a computer network diagnostic tool for displaying the route and measuring the time intervals at each router that a packet takes across the network.

Ping is another diagnostic tool that tests the reachability of a host on a network and measures the round-trip time.

Both use Internet Control Message Protocol (ICMP) requests to obtain this data.

Both of these network Utilities can be found within the U-verse Gateways. 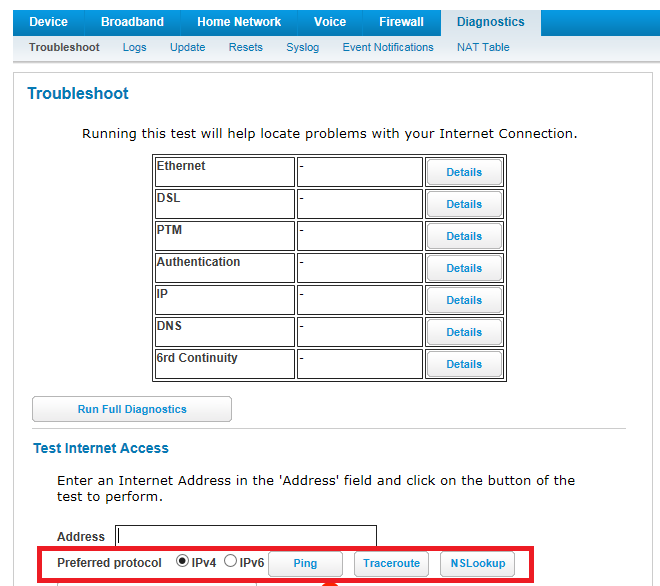 With packet loss, depending on the hose you are accessing, it may be blocking or putting a lower priority on ICMP requests, so a high packet loss does not necessarily mean an issue.

What makes a good round-trip time can vary based on your connection medium (wired/wireless) and the site you are accessing. Accessing a site local to you versus one overseas will produce a great difference in times. If you do notice any discrepancies, you will want to run a traceroute.

(IPs in this example are not real)

When running a traceroute, the most important thing is to see if the trace completes before exhausting all the hops. If it does start timing out, try running a ping test to see if the site is accessible. If not, then it could just be the host blocking ICMP requests, or there is an issue with the route, and the traceroute report will let you know the last route it was able to reach. In the example above, after hop 8, it starts timing out. You can run a whois search to see who manages that IP and reach out to them to investigate the issue further.

You will also see timeouts on hops 2 and 5. Since the packets are making it to the next path with no problems, we can assume that the routers at 2 and 5 are completely blocking ICMP requests.

You will also notice a higher latency on hop 6. Usually, high latency is a concern, but in this case, one can assume it is due to ICMP rate-limiting, since the timing on the other routes after it is back to normal. If they were high as well, then we can assume that a problem is starting at hop 6. When measuring latency, the best measurement will be the final hop or conducting a ping test.

Ping and Traceroute are useful tools to determine latency and browsing issues. If you do notice issues:

If the previous steps have been exhausted and there still appears to be a problem, please send a private message with your account number and contact details to ATTU-verseCare for further assistance. If you are not a member of the U-verse community forums, we welcome you to register and reach out to us.

Ping times of 100ms are not "great". That is a tenth of a second delay for every single communication. If a web page has a hundred pieces, and most do, that is a ten second wait.

Under ten msec to the internet is "great". 100ms is slow.

FWIW: Anytime our connection slows up it is failing fiber or failing hardware on the AT&T side. 100ms is never a good sign.

This article is posted in the non-fiber section.  While 100 ms is not "great" for ADSL2+/VDSL2 (where you get 20 ms just to the first hop within AT&T's network due to interleaving), it's worse for fiber.  The physical distance to the hop also has to be considered, even when not crossing the big ponds on either side of the country.

Tracert latencies can often be worse than latencies for actual traffic (for the same reasons that you get no responses).

I'm not on fiber. The fiber I am referring to is in AT&T's backbone.

I monitor ping times because it is the single best indicator I have for when the AT&T hardware is failing. When the ping times rise much above normal, I know that they have failing equipment days or weeks later it blows, and we are left in the lurch. I had an AT&T employee bemoaning the lack of internal spare parts, as in total lack of parts for their equipment. Hardly robust or reliable. Just in time was never a great idea for anything that needed to be reliable.

I assumed you were on fiber due to your comments on a thread of fiber customer issues.

I agreed that 100 ms isn't great.  If you're not fiber, your ping times start at over 20 ms to your first hop and you should expect pings to a speed test site of 30 ms or higher, especially if your test site is hundreds of miles away.  Less than 10ms is impossible for your connection.