Pre-order the New Samsung Galaxy Z Flip4 & Galaxy Z Fold4 and, for a limited time, get twice the storage and a free case!
Need help with your equipment?
Get started

I previously had my WHS set up and working fine for remote web acces for use with my AT&T Uverse internet. However, I think the RG has recently had a software update or something, as it has lost all my settings. Now, when I try and set it up to open ports 433, 4125 and 80 for WHS, it comes up with the following error:

WHS Ports conflicts with connectToCiscoAP which is currently in use on Cisco_AP_ATT.

Any idea whether its safe to remove the "connectToCiscoAP" rule and allow my rule so that I can connet to my WHS from the web? Will it mess up my TV or wireless TV receiver or something? I don't recall having this issue last time I set it up, but may have forgotten!! Many thanks.

The "connectToCiscoAP" rule is automatically added to the RG by AT&T for those people who have wireless STBs. This entry reserves port 443 for the Cisco access point for the wireless STBs so that AT&T can communicate with it and manage it.

If you have wireless STBs and need to use inbound port 443, the only way to get around this entry is to use static IPs ($15/month).

You might want to verify that your firewall is properly configured and the proper ports are allowed for inbound traffic. You can do this by going to http://www.canyouseeme.org/ and using their port checking tool. Be aware that this website can only test TCP ports, not UDP.

No, the switch should not interfere with anything. The switch doesn't know about IP addresses or ports, it operates at a lower layer.

OK, now remember that all of these ports are used for different things. I was looking up some WHS tech documents, and I can only find that WHS needs 3 ports open for remote access. 80, 443, and 4125.

So here's what I recommend:

2. Verify that they all work from another computer on your LAN:

@SomeJoe7777 wrote:
The "connectToCiscoAP" rule is automatically added to the RG by AT&T for those people who have wireless STBs. This entry reserves port 443 for the Cisco access point for the wireless STBs so that AT&T can communicate with it and manage it.

If you have wireless STBs and need to use inbound port 443, the only way to get around this entry is to use static IPs ($15/month).

So, does that mean everyone with a wireless STB is precluded from running secure web servers/services on the standard ports?

You'd think they would use port triggering instead of a continuous forward if it's only for sporadic management access.

So, does that mean everyone with a wireless STB is precluded from running secure web servers/services on the standard ports?

You'd think they would use port triggering instead of a continuous forward if it's only for sporadic management access.

Yes, it means that.

Yes, it sounds pretty heavy handed of them.  However, most residences don't run web servers at all, let alone SSL protected ones, and if you're really serious about running a web server at home, you'll probably buy a static IP address.

Is it any more heavy handed than preventing you from using 10.0.0.0/8 as your LAN subnet?  Maybe.

Thanks For the info SomeJoe7777.

So, not sure if you can help, but is there any way to change the port that my WHS uses for the connection to the internet??!!

Any other ideas on how to get round this, as I'm flatly not paying an extra $15 a month?!!

Yes, you can assign alternate port numbers to WHS. See the following article:

Thanks for the link. I think I managed to change the WHS ports (I'm using WHS 2011 so it wasn't exactly the same), but I still cant get access to my server from the web; I just get the error:

Error 324 (net::ERR_EMPTY_RESPONSE): The server closed the connection without sending any data.

What am i doing wrong??!! I have had it going on AT&T before, but I never went through such issues!!!!

Thats a great site - thanks for the link. So, it turns out I can't access all the ports that I've opened; the only one open was 80 - all the others were closed!

Is there any way to find out a list of ports that AT&T will allow me to open, or is it just a bit of trial and error?!

You should be able to open any port on the 2Wire except:

For an example of how to open multiple ports for a single application, see the following post:

Follow the directions under the "2Wire Camera 1 Setup" section, except substitute your own port numbers for the WHS. 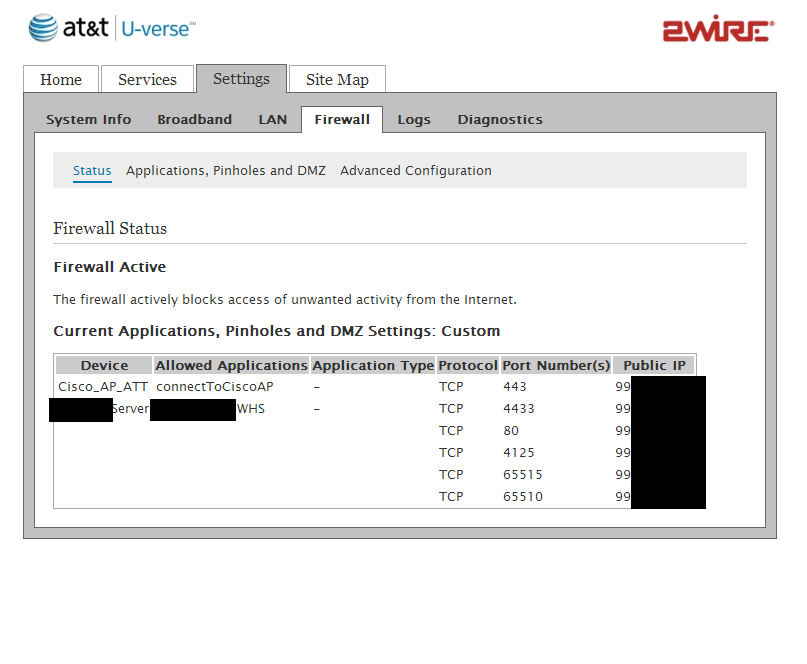 Well, from what I can see on the firewall status screenshot you posted, it looks like you're opening the ports correctly. As far as why the WHS isn't responding, I can't explain. I don't know too much about WHS, so other than pointing you to the article I found on changing it's ports, that's about all I know.

I hate to refer you elsewhere, but you might try a WHS forum and see if they have anything additional to offer. Because at this point, it doesn't look like the firewall is the problem.

I know why WHS doesn't respond: because according to the canyouseeme.org site - the ports aren't open, even though the RG syas they are!!

All that the canyouseeme.org site can test is if the TCP connection will open or not. That tells you if it's working, but if it's not, it doesn't tell you why.

If the connection can't be made, that could be because the port isn't open. It could also be because the WHS server isn't responding, even though the ports ARE open. This is what appears to be the case, because your screenshot above clearly shows that the ports are open.

Can you get to the WHS on the LAN? What happens if you go to https:// ?

Ah, I see, I understand a bit more clearly now!

I'll do some digging, but I dont know exactly where I should be looking...!!