I installed the AirTies extender to my network.  It shows up in my network connections.  Should I connect to that device?

Also, it asks for a passcode.  I do not use one on my home network and prefer not use one with my extender.  Can that be done?

Should I connect to that device?

Also, it asks for a passcode.

You've powered it on, but have not linked it to the modem.

I do not use one on my home network and prefer not use one with my extender.  Can that be done?

Yes. Link the AirTie and it will have the same SSID and password as your AT&T gateway.

Thank you for bringing your question to the Community Forums. I would love to help!

I was able to locate a great eSupport article on how to manage AT&T Smart Wi-Fi Extender - AirTies 4920. This will have information on how to set it up and get it up and running

Please let me know if you have any further questions!

Maybe there's another thread covering this, but for the life of me I cannot tell if my AirTies 4920 WiFi Extenders are doing anything. I even got on their IP address through my laptop and I can't tell which (if any) devices are using the AirTies signal. My BGW210-700 shows the AirTies as a connected device - oddly enough it shows the extender as being wired even though is wireless connected to the gateway.

Is there a sure fire way for me to tell if any of my devices are using the WiFi Extender's signal?

I've clicked through all the option available below, but I still can't see any devices using the extender's WiFi signal. 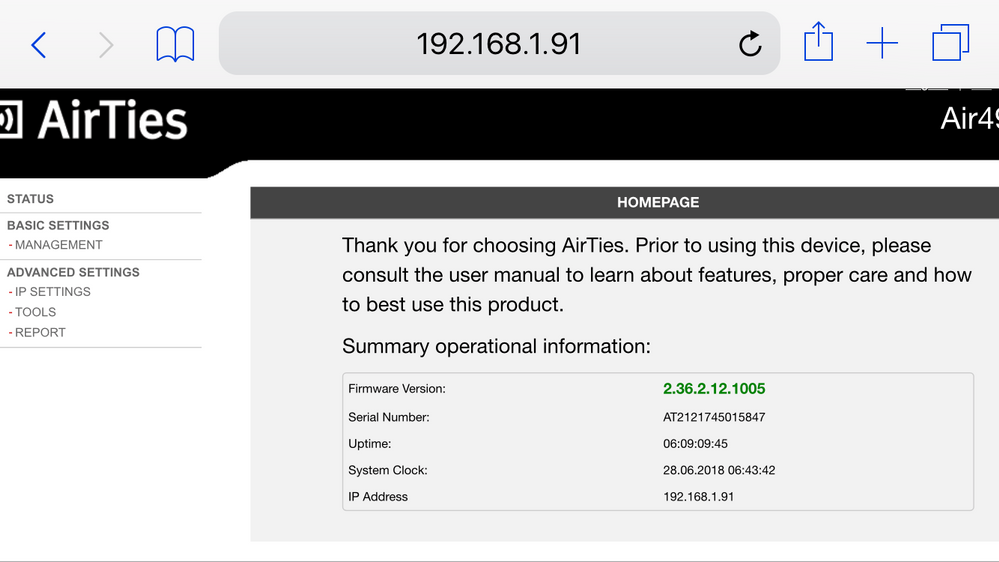 I am having the same issue.  Anyone figure out why nothing will next to it?

Same issue here.  The extender shows up with its own IP address but there never are any devices connected to the extender.  I have been playing with locations of the RG and extender.

Does not make any difference.  It appears that everything connects to the RG.  The result is some of my dozen devices show up in red or in orange, warning that the devices should be moved closer to extender.

Based on my observations and others here, it’s becoming apparent that the AirTies extenders provided by ATT serve no useful purpose or if they do serve a purpose then there is no way to prove it.

When I choose each extender, they both say “0 devices connected”. Oddly enough both AirTies show “last connected at 5:41 PM today” which is 5 hours ago.

I am at a loss here.

I tried a full reset of the extender using a paper clip and the reset button on the rear of the unit.  This required a re-pairing of the unit using the RPS button in close proximity to the residential gateway.  It successfully reconnected but I still do not show any devices connecting to the extender.

Hmm, if devices do not show up, how do you trust it works.  Since, in my case, the device that is closest to the extender is giving the red weak signal dashed line it seems to confirm that it does not extend.

There are some fairly good trouble shooting solutions at this web site for Airties.  They give a number of recommendations on placement, disabling other wifi, using wired connections etc.  I cannot verify yet that anything here works but it is one of the best list of FAQ's I have seen on troubleshooting the product.

I am having the same problem but I know it works. I use the Smart Home Manager app on my iPad and under "Tools" I chose "Wi-Fi Test" and it showed the iPad had a much stronger connection than without the Airties extender. I think it's just a software bug that it shows "0 devices" connected to it when there really are.

In response to the above posts and based on my situation I
decided to do a test.  I have a single Airties connected to my residential
gateway(RG).  I connected  the Airties via Ethernet at a mid
level floor. Like above, I would never see any device connected to the Airties
via the Smart Home Manager.
For the test I disabled the WiFi on the RG.  Doing this would mean the only WiFi
connection I would have would be the Airties.  When I attempted to connect
via WiFi I had success throughout the house.  My conclusion is the Airties is
doing what it is suppose to do, the app Smart Home Manager is buggy.
It certainly does not recognize devices connected to the Airties and it appears
it does not distinguish between wireless and cable connections.  I do
believe the device list it produces is correct, however not how they are
connected.  And the speed tests seem to have some value.  Do not rely
on any information from the Network Health Check, for that matter I would avoid
any results from Smart Home Manager.
I have done further testing to determine the best placement for the Airties.  For
this I used an iPhone app called WiFi Sweetspots.  The process consisted
of placing the Airties in several locations and then running Sweetspots at
commonly used locations.  My results showed the best results with the
Airties connected via WiFi and placed on the 2nd floor with the RG in the
basement.  Your results will vary so testing will be the only proof.
The Airties link I referenced above recommends at least one floor between the
RG and Airties, I would guess walls would qualify as floors.

Thank you for all of this. Glad to know some AirTies do work. However, your test only proves that the AirTies only work as a gateway IF the main gateway’s Wi-Fi is disabled. When in fact, the AirTies should be extending the range of the actual main gateway.

My issue, even with two AirTies connected, is that my devices still show a weak Wi-Fi signal even though the devices are right next to the AirTie extenders.

Maybe the solution would be to turn the Wi-Fi completely off on the main gateway and use the AirTies as the only routers...