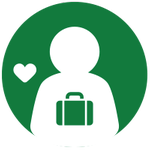 AT&T Account Automatically Reactivated and I was billed without knowing.

On August 2017 I paid my bill in full and requested to terminate my service due to the fact that AT&T did not have an affordable unlimited data plan at the time. I was recently considering switching back until I received a notice that an outstanding balance was sent to collections. I was confused because I have not had an AT&T account for at least 2 years. After speaking to a couple of AT&T representatives over the phone it turns out that the associate that I spoke to never cancelled my account and instead accepted the outstanding balance. After a month the account was automatically reactivated without my consent and I was charged for another 3 months of service that I never used and never knew I had. The representative told me they tried to reach me by email but the email they had on file was from a work email that was defunct. The representative I spoke to was condescending and unsympathetic and said they could not do anything about the situation. The original representative I spoke to in the store 2 years ago seems to have cost me hundreds of dollars that I will never get back. This type of negligence should not fall on the shoulders of your customers.

What is unfortunate is that I was considering going back to AT&T but this has done the opposite of inspiring confidence in their customer service.