I recently had ATT Fiber installed in my home. The home is wired throughout with cat5 ports in almost every room in the house. I am happy with wifi in most parts of the house for mobile devices as an example. However to a few rooms in the house I'd like to use wired connections. The modem is currently connected in one room and I can't seem to move it to any other room and get service. This tells me the technician only enabled the wiring in one single room. I want to have wired connections in each room already wired in the house. What are my options?

Should you not understand this basic concept your will have to bring in a geek from Best Buy.

@ApexRon Thanks for the reply. There is a panel and hubs for telephone and data cabling all patch wiring (laundry room.). However they modem is not in that room. Instead the modem is plugged into the cat5 port of a front room on the main level. I thought of plugging into the modem from this patch panel then using a switch with cables to each of the rooms i want wired (there are two data hubs there - ELAN DH8.). My issue seems to be determinig how the line coming in from outside (the att box) is wired. My thought provess was if I can identify that line i could put a rj45 jack on it and connect the modem to it. I'm a complete novice on wiring. I also am a little confused at the patch panel since the telephone master hub doesn't have a 'From Telco' wired.

Since you have fiber, I have to assume that they installed a 5268ac. You will need to determine where the connection to the 5268ac is coming from. Hopefully from a jack/plug that is not part of your house wiring. If that is the case, then you will need to find a RJ-45 near the 5268ac. Using a CAT-5 patch cord, plug into an available Ethernet port on 5268ac and the RJ-45. Hopefully, everything is labeled on your patch panel. Using a  patch cord from the patch panel port going to the 5268ac connect to the switch. Now with additional patch cords you can connect to as many patch panel connections you need to supply Ethernet to other rooms.

@ApexRon Here are some photos of the current setup.  First is the pictures of the outside. 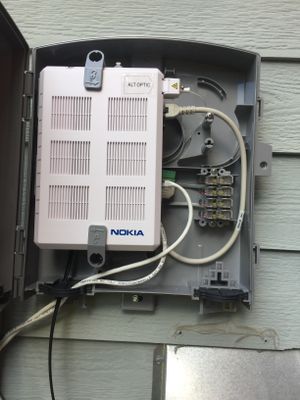 I assume this is where the line from the curb comes.  The white cable near the bottom partially hidden goes into the power unit.  The other white cable is plugged into a port marked Data1. 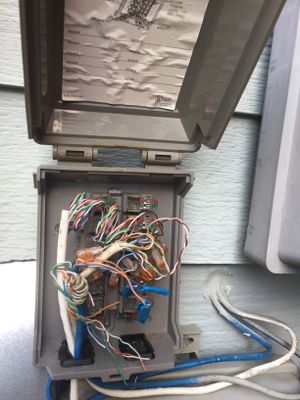 Here the "clean" white wire is the one running to the Data1 port in the previous picture.  The other 3 lines run into the house and to the structured media panel.

Here are some shots of the panel in the house. 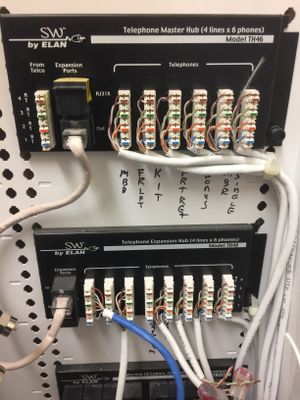 I assume since I was told the copper is used that one of these is one of the three coming from outside (I suspect the blue one or the white one next to it as they are unlabeled beneath the hub.

And finally - here are the data hubs which are below the telephone hubs in the panel. 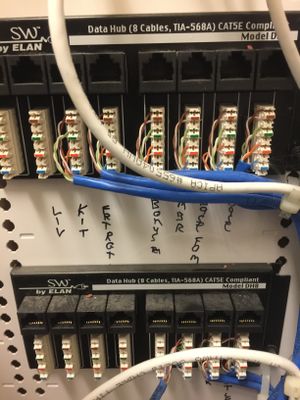 As mentioned - the current setup is in a front room on the first floor - the cat5 port is used to plug into the modem (it is a 5268ac.)  It is a port that I assume is active because it is wired into the same telephone TH48 panel as the line from outside (either the blue or white one.) If I'm right - I'm puzzled as to why so far my attempt at putting the modem in another room isn't working.  I assumed that everything in that hub would work the same way.  Unless I'm either wrong - or I have to try one of the specific rooms on that Th48 vs. other rooms wired to the master hub th46.

Here are excellent documents that may help you: Elan Data Hub and Elan Telco Hub

Data 1 cable is probably going to the 5268ac. Looking at the manufacturer document and your photo, all telco (phone) distribution cabling should be using the punch down blocks in the TH-46 and TH-48. Telco from the street should be coming in on the far left punch down block on the TH-46. What that blue cable on the TH-48 is connected to, I have no idea. To me it looks like you have no telco installed.

Wait, it looks like the installer removed the blue cable from the DH-8 and punched it down to the TH-48 but I still don't see where they punched down a cable from the box on the outside.

Bottom line, you need someone familiar with this home cabling system to confirm what I have said and then bring AT&T back in to fix it.

thanks very much for your input thus far. Do you think it would hurt to move the punch down from the th48 telephone hub to the dh8 data hub and try cat 5 patch cable out of that port to the modem? Is that something easily reversed if it doesn't work? Also is there a simple tester I can use to definitively determine the line coming from outside the house?

The cable from the internet fiber connection should NOT be connected to any punch down block in your panel. Rather, the cable going to the room desired should also be removed from the punch down block and both cables spliced together. This way you have isolated all telco and Ethernet connections from the internet fiber connection which will reduce or eliminate any electrical noise. Also, be sure to twist the cable wiring similar to the way it comes out of the cable as that will also help cancel noise. You can purchase individual wire splicers from Home Depot or Lowes.

There are testers for this buy why bother with the expense. Just watch the color coding of the wires.

@ApexRon I think I finally cracked the nut after reading your last message, doing some reflection on the OTN, etc.  I am adding a new picture that ties it all together (no pun intended.)  The picture below shows the incoming line (which I finally found labeled SVC in marker) spliced directly to a blue cat5e cable (which I found labeled LIV in marker i.e. hard to see black on blue.)  You can see the white cable in the last photo of my previous post running in the foreground across the front of the data hub behind.  This is exactly what you described. 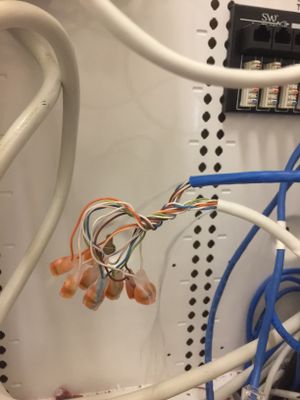 So, with regard to #3 - can I crimp the SVC line directly and plug to the modem - or should I splice another cat5e into that line to the modem?

I got confused at step 3, sorry.

If all that is correct, then locate the telco and data ports in the room where you want the 5268ac. Hopefully, they are close together, I am going to assume so. Follow these steps: 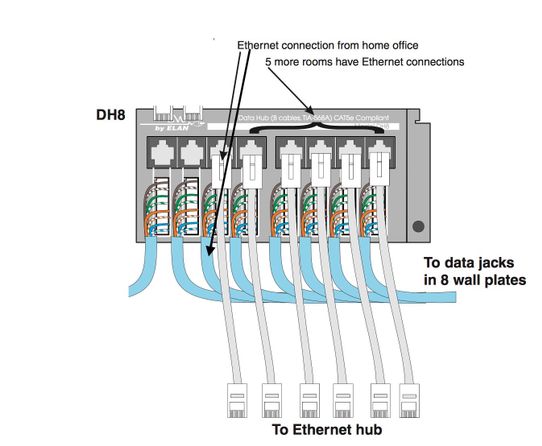