Learn What You Need For AT&T Fiber Speed

First, AT&T Fiber requires the right hardware. If your device(s) is not compatible with gigabit speeds, you may not be able to take advantage of the plan/ speed you are subscribed to. Check out what you need below!

Before troubleshooting, you'll want to check the speeds through the modem. This will help determine if you are getting fiber speeds from the outside fiber cable and isolate the issue, either with your equipment or the AT&T network.

What impacts your speed

Remember, the older the equipment is, the less likely it is going to be compatible with gigabit speeds. We recommend updating the equipment if you determine the hardware is not compatible. If you have 1G plan, testing near or around 600 mbps is within the parameters of the plan.

If the above does not help and you meet the hardware requirements, troubleshoot using our Troubleshoot & Resolve Tool via a browser or mobile device! It beats calling in!

Test at different times shows speed is less that 3Mbps, and one in a while is goes to ~60Mbps, but never seen it closer to the 1000Mbps, not even using a short 3ft LAN cable from the ONT to the router, and another 3ft lan cable to the laptop

Our community recently was wired for fiber optic.  We are the first to have it installed.  My speeds are TERRIBLE. After numerous service calls, the last tech told me that the router is garbage and I need to buy an aftermarket one!  Speed tests show less than 100 mbps both up and down, and we are still constantly waiting on videos to stream while they start and stop.  I am sick of looking at a spinning disk.  It does not seem possible to escalate the issue to anyone who cares.  Other than blanketing my neighborhood with flyers in the mailboxes warning folks about this scam, what can we do?  I feel like I paid for a 16oz. filet and got 1oz. of stew meat in the package!!!

Thank you. I did as you suggested because when I first got 1G installed I was getting 930down/930up and until recently testing via http://beta.speedtest.net/ using Chrome browser I was only getting 320down/930up. And now after performing a test with the Speedtest App from the Windows App store the results are much better, 689down/923up. Not as good as AT&T promises, but I have been doing IT for 15 years and do understand that this is not a guaranteed speed, it is all in the hardware, and "testing near or around 600 Mbps is within parameters of the plan."

I will keep working on this to tried and get a more accurate result.

Interesting about all the users that are not even getting close to gigabit speeds.  I too have had problems since installation earlier this year.  I have the Gigapower package.  AT&T naturally tries to blame it on everything, but their equipment and service.  I noticed slow speeds on various equipment throughout my house, which was initially understandable given wireless, etc.  However, I have isolated my testing down to a fairly new I-7 laptop with a fresh OS load of Windows 10, with a wired gigabit built-in NIC connected directly to the AT&T modem.  This laptop is not used for any other purpose or work, it is specifically for the testing.  All other devices are disconnected from modem and wireless is disabled.  The laptop is not connected to any other accessories and wireless is disabled.  The cable running from the laptop to the modem is a new CAT6, and I have tried a few others, just to ensure it wasn't a cable issue.  No other switches or routers connected when testing.  I was getting speeds in the 700-900 area at installation.  After about a week or so, I was getting speeds in the 200-400 area.  I called and AT&T sent out a technician who said nothing was wrong, but he called in and had another tech "reset" my account.  Magically, I was getting 700-900 speeds again.  Within a few days I was back around 500.  After testing off and on over the past few months, I tested again last night.  I'm currently getting around 200-400 again for speeds.  However, I've noticed a great discrepancy using AT&T's speed test which uses DSL Reports test engine, and speedtest.net (another well known testing site).  I do realize different servers have different capabilities along with the networks and distance involved.  For that reason, when using speedtest.net, I use various servers and locations to try and get an aggregate speed rating.  I don't average the speeds, I try and see what are the best results I can achieve from various servers.  The AT&T tests showed 700-900, while speedtest.net showed 200-400 last night.  I do however, almost always, get upload speeds of 800-1000.  Therefore, I know the equipment is capable of handling the speeds, and have seen high speeds sometimes.  When choosing test sites with speedtest.net, I'll also use AT&T's servers as some of the test sites, which should mean faster speeds routing on their networks.

Overall, I have fast internet (perception), but there's quite a few times I'm experiencing slowness or pausing.  I cannot say that my actual speeds or service is any better than when I had 45MB through U-verse.  When testing speeds on the 45 MB service, my speeds were very reliable in the 35+ range, along with the upload was always within a very small variation of rated speeds.  I cannot pinpoint the slowness or pausing to any particular sites, devices, or times, it all seems pretty random.  I also setup an Orbi router last night, but that hasn't resolved any issues and wasn't in the mix for testing last night.  I might add that the modem was also rebooted a couple times last night while I was doing the speed tests, so that also should not have been a factor.

Has anyone else seen or know of issues using speedtest.net vs AT&T's or DSL Reports testing sites?  What is also alarming about this whole issue is that when AT&T gets involved and "resets" my account, it magically starts working again, but only for a few days to a week or so.  It seems to gradually creep down when you're not watching.

After reading here, I will disable the IPv6 settings to see if there's a difference.  However, I'm not sure it's going to make that BIG of a difference.

Same problems here folks. I have dad the Gig service now for a 5-6 months. When I first started up the service it was AWESOME!!! I registered solid speeds 800 to 900 download with mirrored upload speeds. The Problem- a couple months ago my download speeds started dropping... Went from the 800 range to the 500 range (download speeds). Then to the 400 range (download speeds). For right now my download speed is hovering in the high 300's to the mid-400's with an upload speed of 800 to 900. I'm no tech Guru but I'm no dummy either. This is all sounds a lot like nonsense to me and no one has any solutions, not even AT&T.. With as many people that have the SAME EXACT degrading internet speeds and AT&T blames the individuals computer.... Sure. Hopefully Google Fiber will be in my area soon and save me from the madness...

Same problem here.  Download and upload speeds were originally great, but over time download speeds have decreased to the 300-400 range, while upload speeds remain strong.  So glad I found this forum because I thought I was going crazy . . .

I just posted my experience in another thread, but thought I would post here as well since some may not know about the other thread.

As I noted above, my hardwired download and upload speeds were originally great, but over time download speeds have decreased to the 300-400 range, while upload speeds remain strong.  I've determined that the problem stems from something going on with the antivirus/firewall software, and unfortunately it is not program specific.  I tested a laptop loaded with Norton as well as on a laptop loaded with Kaspersky.  Same result in both cases, i.e., download speed was throttled with antivirus active, but instantly increased once the antivirus program was deactivated.  Below are my before-and-after results.  I've read that AVG suffers from the same issue. 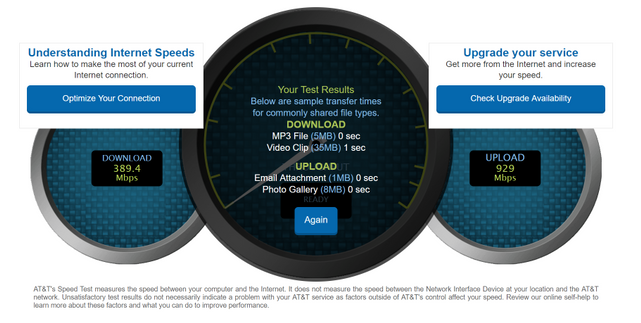 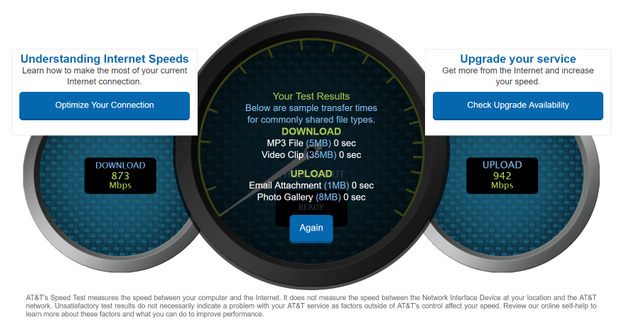 Well count me in the club!

Now I am sitting around 300ish mbps now with a steady 900mbps UL. I told AT&T about this and they tried all the basic resets over the phone. Resets on both ends maybe got me to 430mbps DL but not even to their minimum 600mbps. They opted to send a tech and the tech called and had me pull up the network settings where it says its bringing 1 gig in on the LAN but the speed test from AT&T site still do not show ANYWHERE close to 600mbps.

Tech said it is not worth him coming out and that my network hardware cant support or process the gig speeds. Doesn't make any sense since it WAS running at the full speed and now its throttled back after the first week.

I sense that there may be a marketing scheme going on where customers start strong and then they get throttled back. Their techs are likely trained to use excuses and deflect the core problem here. Centurylink is literally being sued for these types of practices.

I've had the very same experience and continue to have fluctuating speeds,
all of which are below what is advertised. I too had near perfect
performance with lightning fast speeds in the first couple months of
service.
I don't think the techs are complicit. I do believe that AT&T throttles
back on the service intentionally. I'm not an engineer and certainly do not
fully understand the technology. But if you consider the numbers of users
that have reported the same experience then it is hard to dismiss as "user
error" or "Your equipment", etc, etc.
It's just the way it is. I for one am really really looking forward to
Google Fiber for the San Antonio area! And, can't wait for Google to offer
cable or satellite... Anything to get away from AT&T.

I am having the same issue the best down load I can get is 270 mbs but my upload is slightly higher, Ihavent call ATT back yet but will be doing so shortly.