Announcements
HBO Max - where HBO meets so much more!
J

I have 10 devices on a 1 Gbps network and in general, no bandwidth problem. I have an AirTies extender outside of the master bedroom that provides consistent and solid 100+ Mbps signal on 5 GHz throughout the bedroom. At least two devices in the bedroom regularly switch from the Extender back to the Gateway. The Extender is about 3 feet outside of the room, between the room and the Gateway. The Gateway signal barely creeps into the room. I would say the Gateway is about 60 feet away. It doesn't surprise me that the iphone XSMax would periodically switch to the Gateway and hold on to it, but the AT&T TV box, which is stationary and about 6 ft away from the Extender does as well. It seems as though there may be a maximum number of devices attached to the Extender of 4. There also seems to be a preference to drop XSMax and the AT&T TV (the two most important devices that require good bandwidth) and not the other devices, which are all much older and not used much (2nd gen appletv that is not even on, a 2016 macbook air, and a very old ipad that is rarely used). I haven't confirmed an event that causes the switch but it almost seems as if it's the connection of a 5th device to the extender network.

Hey, @jleitner, we'd be glad to help keep your devices from switching networks.

It's probably Band-Steering that's causing your devices to switch constantly like that. If it's enabled (Which it is by default) your devices will choose the network with the best connection at the time. If you disable it they will no longer do this, and you can try connecting some devices to your 2.4G or 5G network to see which one is more stable.

To learn how to do this, please check out our article on Combining Wi-FI Network Names. At some point in the article it will ask you to make sure the network names are the same, but you will want to change the names to be different from each other. Just having 2.4G or 5G at the end of the respective network is fine.

@ATTHelp Alas, this is not my problem. In fact, that was the problem I first had and a helpful rep on the phone switched it off for me (before I started using smart home manager) and that fixed a bigger problem. This was before we brought an AT&T TV Now box into the picutre, at which point I discovered that this problem was not just with the Iphone XSMax, but also the TV now box, so I am thinking there is something about newer devices that makes them disconnect or something. I tried installing a second extender between the gateway and the existing extender and it seemed to improve things in a very strange way. In smart home manager, the second extender showed up as a standalone device connected to the gateway, with no devices connected, while the other extender also connected back to the gateway, but the signal levels on the devices all started to show up green, even though they showed up as being connected back to the gateway 60 feet away. My problem is focused only on the 5 GHz channel. (The same problem exists on 2.4, but I'm not going to worry about that at the moment because it never improves things to swithc to 2.4.). Unfortunately the new extender has gone offline, so it looks like I'm going to have to go through some efforts to stabilize it. My problem is definitely not solved, although for a few hours last night, I did have my best looking netwowrk in terms of individual data rates on devices that I have experienced.

@jleitner in order to characterize what's going on here, I'm including a smart home manager snapshot that represents my current attempt of dealing with the problem. In between my gateway and the original extender, which are about 50' away from each other (and where the devices requiring the most bandwidth are a further 7-10' away), I have placed another airties extender. I also moved the original extender about 5' closer to the devices that need it (when it was at that location without the other extender, SHM would often report that that the signal on the extender was weak.)My hope was that one of the following would occur:

or 2. if devices for some reason are avoiding the first extender, they would at least go to second extender instead of going all the way back to the gateway.

The results were suprising to me in that (1) the original extender is still going all the way back to the gateway and not connecting to the new extender that is between the two, (2) now most of the devices are connecting all the way back to the gateway, even those that had been connecting to the extender before, and (3) many of the devices at the greatest distance from the gateway are now getting strong signal from the gateway (green), whereas they were red before or otherwise connected to the nearby extender. So the addition of the extender seems to be making the signal stronger from the gateway, at least generally speaking. (Another supporing element - at one spot in the house that is about 35-40' from the gateway, this time going through walls and ceilings [about 20' from the new extender], I noticed that a laptop that shows up as connected to the gateway on 5 GHz runs up to 350 Mbps in speedtest for download, 110 for upload, which is way faster than any wireless speed readings I have had anywhere in the house other than within 2' from the gateway.) It's almost as if the devices are mistakenly logged as being connected to the gateway in SHM. At this point, it would seem like I should call it quits as things seem to be working better, even though I don't understand what is happening and the SHM display doesn't make sense, but even with the improvement, the connections still appear not to be stable on the important devices. As shown in the figure, the AT&T TV (most important device) is back to yellow status. The Iphone XSMax is not shown because my wife because so frustrated she refuses to use the wifi. The iphone 8 does not seem to have the same problem, but it is in the distant room a lot less often. 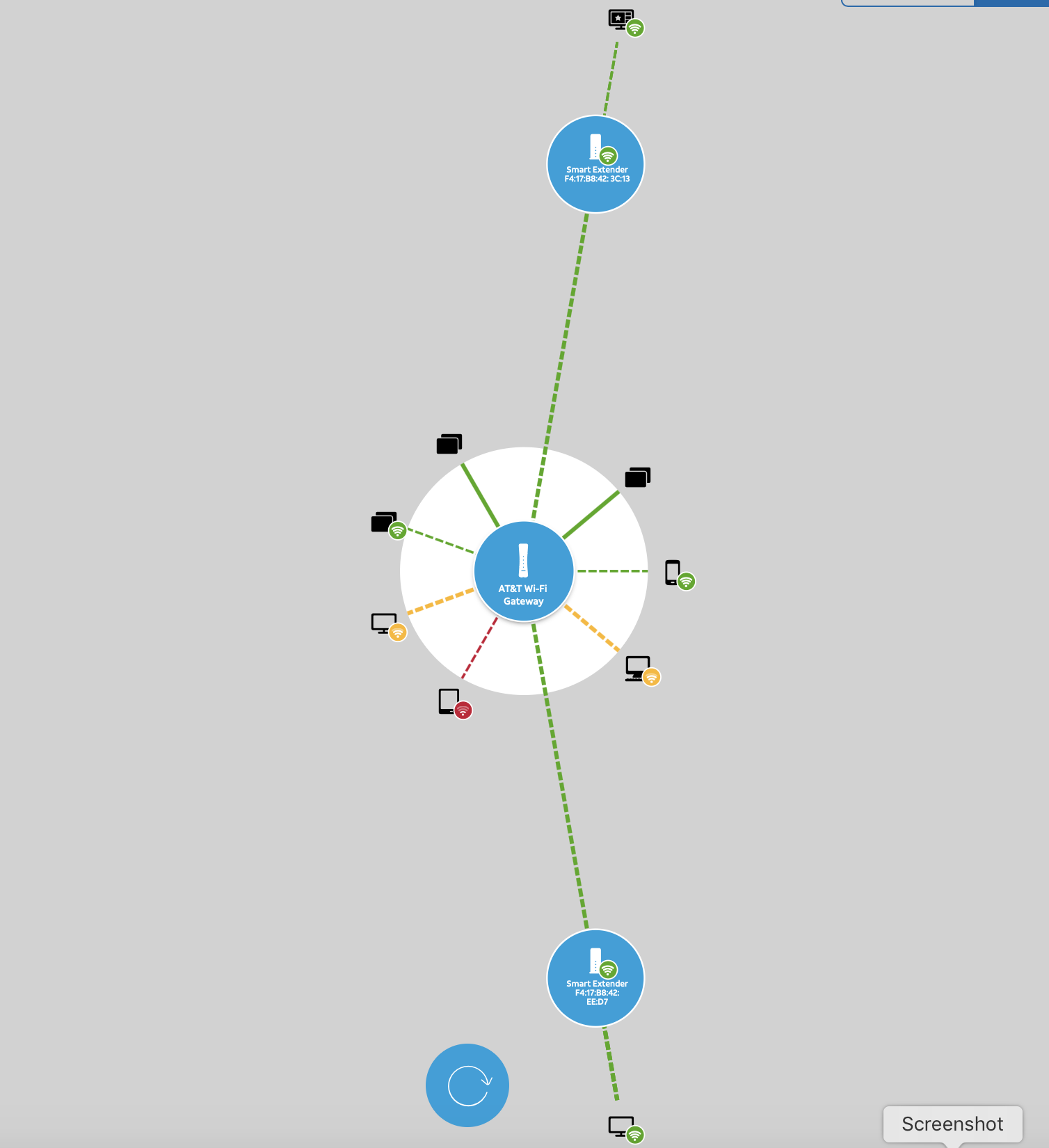 I only use the browser version of SHM since I cannot install the phone app on my iphone.

You can still enjoy streaming on your Roku TV. All you need is to get compatible streaming devices (Fire TV stick, Apple TV) you can plugin and you can enjoy your favorite shows. Learn more here: https://www.att.com/support/article/att-tv/KM1200941/ Let us know if you have more questions.

Yes, I'm aware that with Wifi we can use our Roku, but I would like to make use of the new service I just signed up for and that I'm now paying for, to replace the Hulu live TV service, which we were able to watch on all of our TVs with existing devices. Since we were told by the salesman before we signed up that we could use our existing Rokus to stream the AT&T TV now live service, it made it appealing, but now this is telling me we have to buy all new devices to view the service. It's insult to injury that also we cannot pick up Hulu within the AT&T TV now box, as we were told that would not be a problem either. Something is definitely not right here.

Perhaps i misunderstood the last question. We do not have any Roku TVs. We have several TVs and Roku devices for each of those TVs. We signed up for AT&T TV now because we were told that we would be able to use our existing devices, which has turned out not to be true. (But that's a different problem that I have brought up in a different thread.) I did not intend to go out and buy more devices - we would have stuck with Hulu live TV had we known the truth.

We apologize for any inconveniences you have experienced. AT&T knows how important it is to be able to use your Roku device to view programming and is in active discussions with Roku to reach an agreement.

You are able to stream on third party apps using your AT&T TV NOW credentials for the meantime. This tool has a list of all the third party apps you have access to: https://www.att.com/support/article/att-tv/KM1222524

Please reach back out if there's anything else we may assist you with.