I've ran across several posts in the AT&T forums and elsewhere, where people say their fiber connection is unstable. It will drop for brief periods of time--from just a couple of seconds to a few minutes--but it happens constantly throughout the day. I just had fiber installed last week and I was having this problem.

I would see the same symptoms in the GUI that others were mentioning. Usually, the GUI wouldn't report anything wrong, but if it did say the fiber was down, it would be with an error of "Temporary failure in name resolution."

I work for an MSP and was a Spectrum tech for 3 years, so I decided to do so poking around. I'll just cut to the chase. This is the culprit: 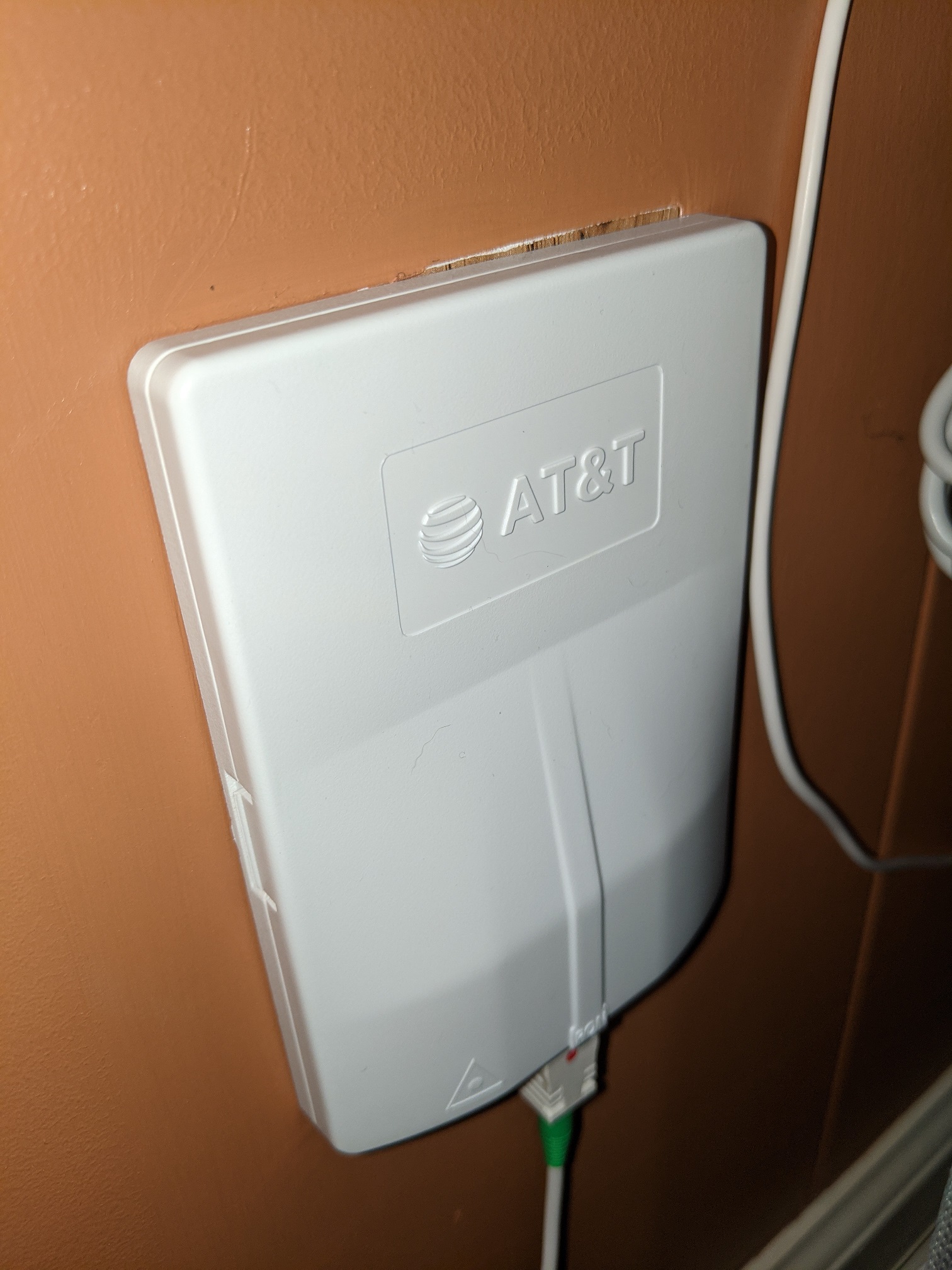 The install tech had said that this new plate was something AT&T was all hot and heavy about. He even showed me where he had to take a photo of the plate after installation, and it would make sure the red dot was aligned properly. Somehow this plate is very important to AT&T, but in my case at least, it was also the sole reason for my intermittent service. Here's why.

Before this plate was installed, this was where the Spectrum coax plate was. Here's a pic of what that plate looked like: 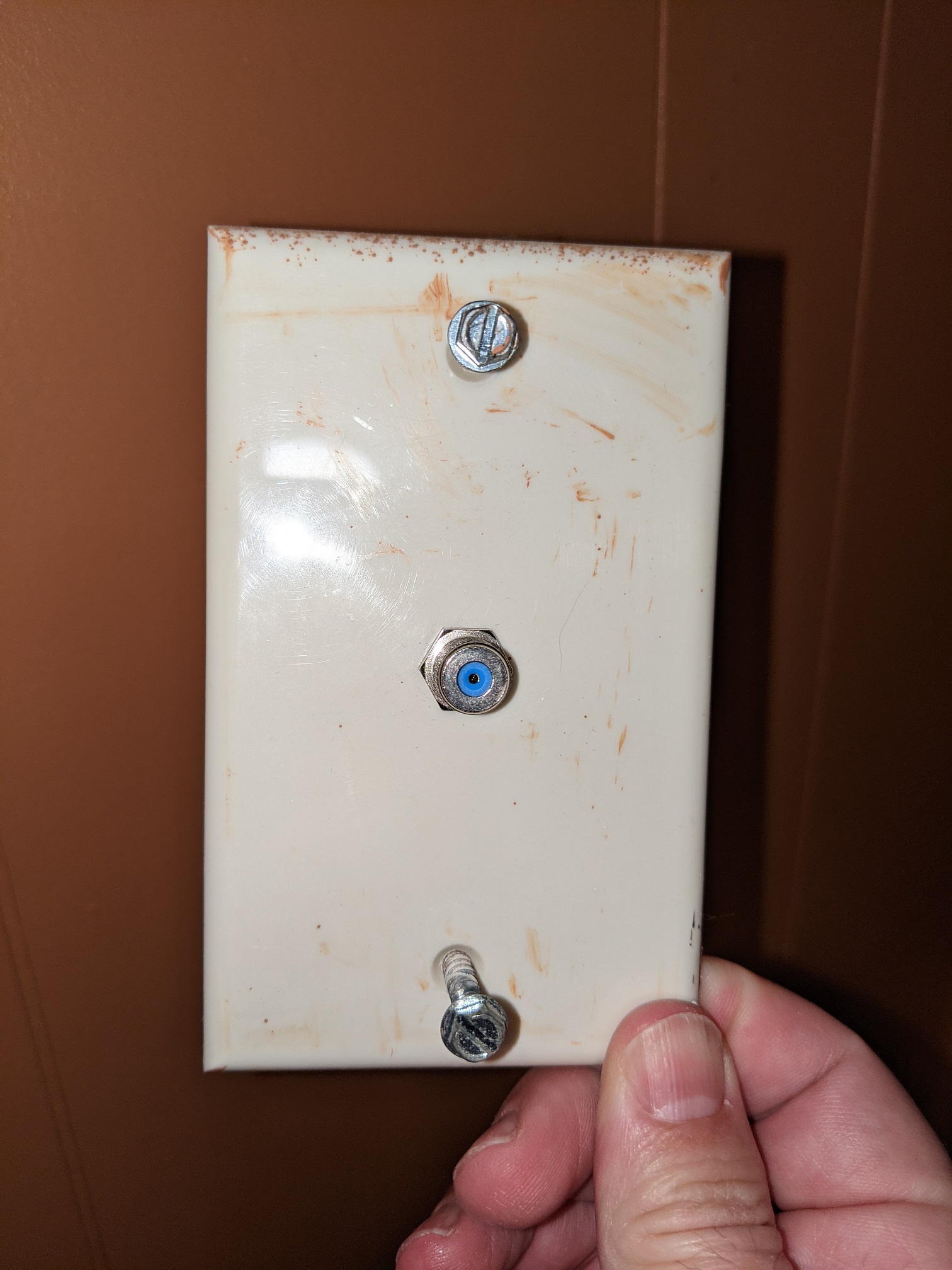 As you can see, the coax is centered directly in the middle of the plate. As was the hole in the wall under the plate. So when this plate was replaced with the AT&T plate, the fiber was put through the same hole, right in the center of the plate. What we end up with is this: 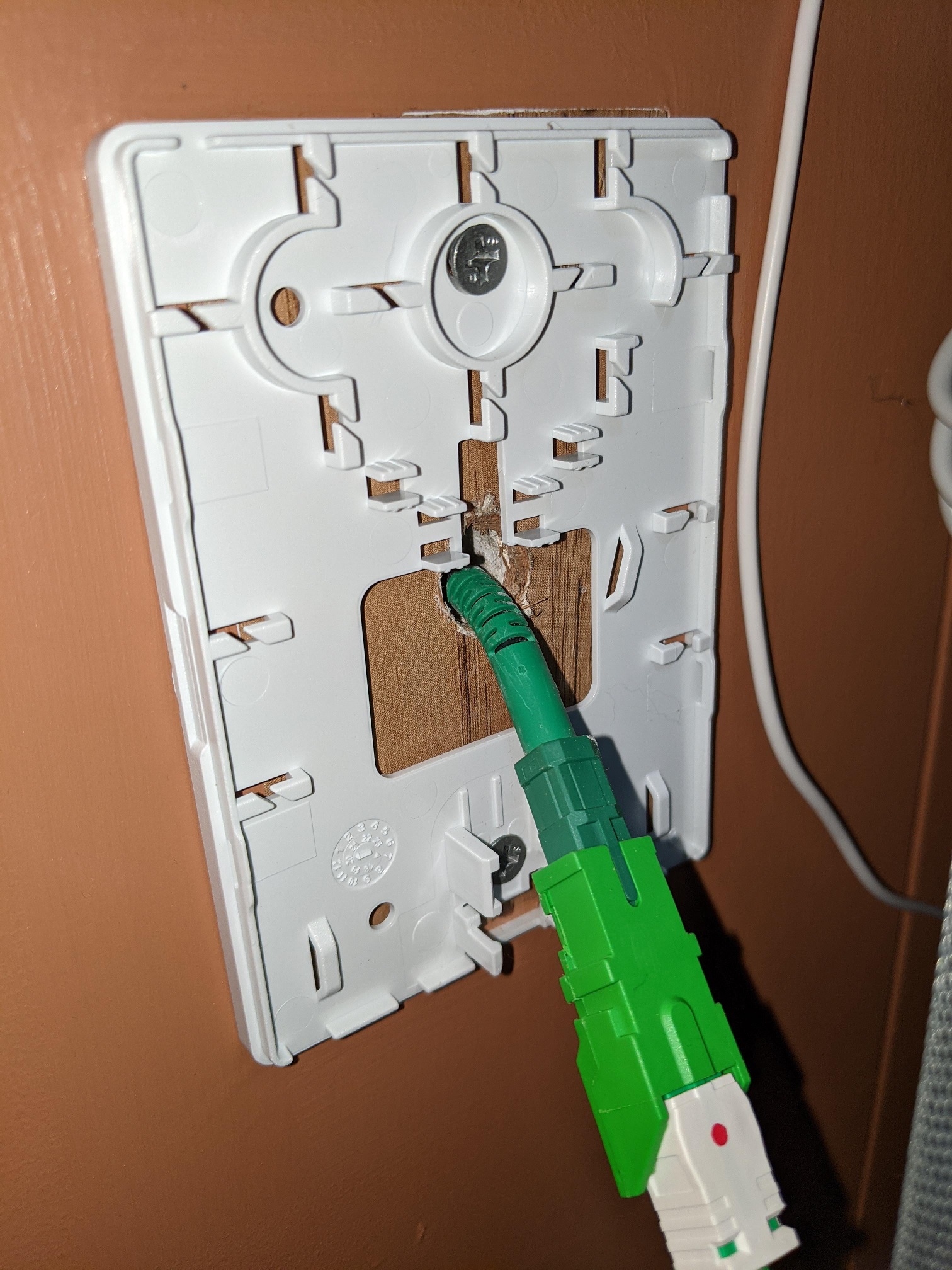 Now, when the lid is on the plate, the light green block is snapped into the bracket at the bottom. In my case, there was so much tension on the incoming fiber (due to the tight bend) that it snapped loose when the lid was removed.

And this, everyone, is exactly what the problem is.

As soon as I removed the lid and left the cable hanging as you see above, my issue disappeared. The incoming fiber was allowed to relax and was no longer forced to exceed its minimum bend radius spec.

I'm not certain, but I think if the hole had been larger, allowing the incoming fiber to rest in the vertical channel you see in the primary large hole of the plate (see pic below), perhaps the bend radius would not have been exceeded: 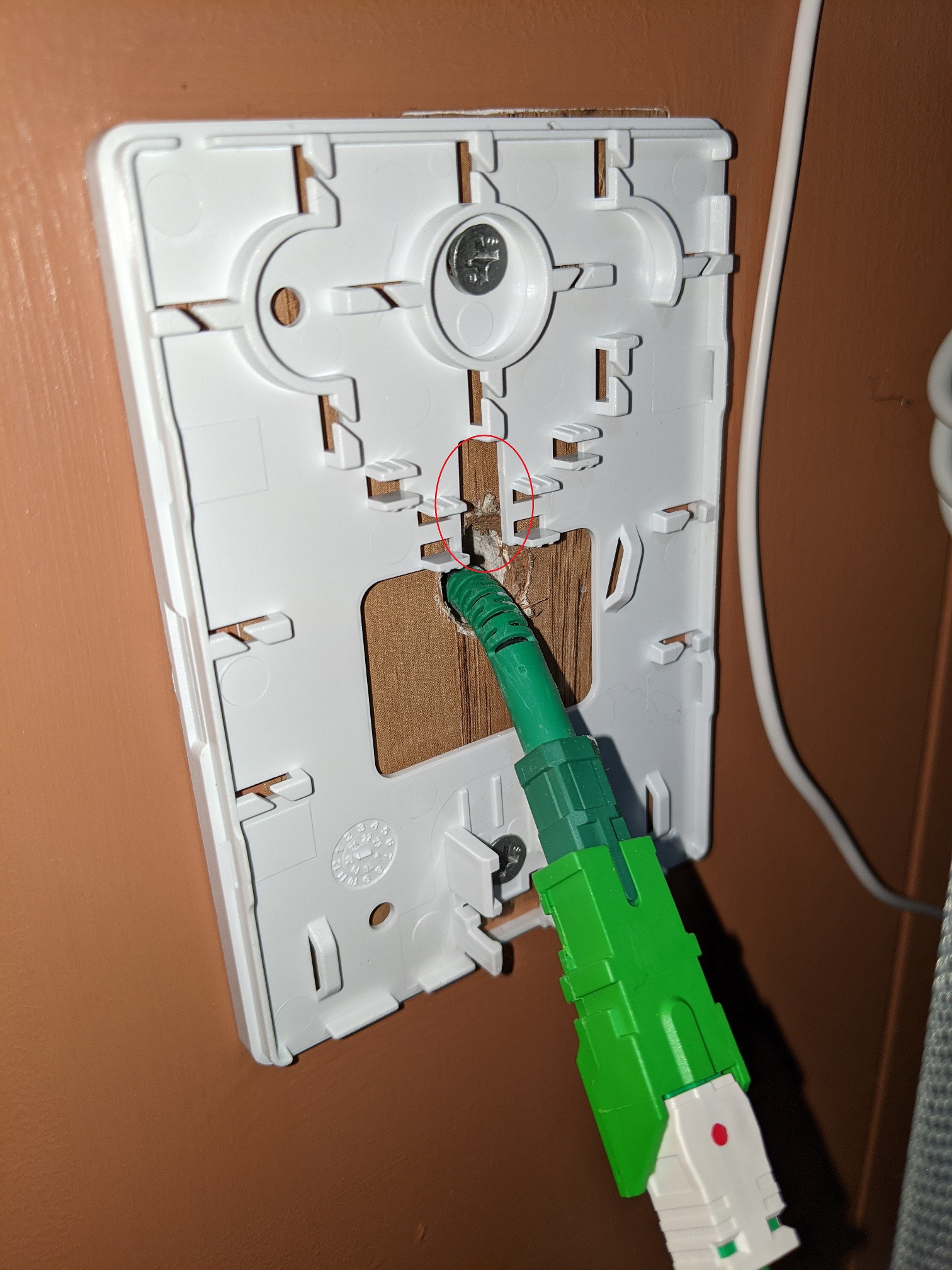 Haven't tested that theory yet. But for now, at least, I am happy that my new fiber installation actually performs properly.

While you could lower the wall bracket to increase the distance I would not expect much good to come from it....

I would prefer to cut the premade fiber end off, strip 9expose about 8 to 10 inches of fiber without sheath (similar to apartment fiber install) placing a new FASTTEC fiber end with excess fiber being placed in the slanted groove cutouts making a circle before going back behind the wall...

The "new" flat wall plate is for 020 ONT (XPON) or direct feed into 320 gateway. The wall bracket is from the 010 ONT (GPON) that is being used for the new flat wall plate.

And yes, the closing procedure for fiber install or repair is upload a picture of the connection, ideally with the ONT in the frame.

The "new" flat wall plate is for 020 ONT (XPON) or direct feed into 320 gateway. The wall bracket is from the 010 ONT (GPON) that is being used for the new flat wall plate.

Not exactly sure what you are saying here. Did the tech use the wrong bracket for my 320 gateway? Or is this just the way it is meant to be done (using one bracket for multiple use cases)?

One wall bracket for multi use....

Nothing wrong with the bracket, but notice the slanted cut grooves...

If have the green connector at base would go above then left forming a clockwise circle then head behind the bracket. This is the normal fiber install when not using the premade fiber run....

Using premade fiber for the 010 bracket I would just go straight down, loop and plug into the ONT.

The 020 ONT does not wall mount, sits flat or in a stand... thus the straight flat wall plate.

The 320 ONT similar is not wall mounted to the bracket, producing different wiring situation. IF the fiber drop would have been straight to the bracket the tech would have installed a fiber end. Instead your fiber drop is likely to a fiber NID with coupler (similar to wall bracket coupler) then premade fiber run to bracket.

I took the plate cover off like in the picture but my internet is still dropping.  Perhaps I need to trace the fiber line inside the house, attic to where it goes thru wall to outside the house to make sure the fiber line is not bent. Other than that I'm clueless as to a fix. Any suggestions appreciated. Thanks