I recently got a new Arris BGW-320 gateway and needed to change the DHCP/subnet range so that I could properly connect with my VPN to work.
Originally had issues getting it changed. But, finally did. However, a day later I discovered that they've started issuing public IP's in the 172.x.x.x. range, and the one I successfully set my network to is actually an IP address for public Microsoft over in the UK. ARGH!!
Being that I didn't want a potential conflict I went ahead and tried to change it again. HOWEVER, I'm getting a big red error message that says " Address must be on network (172.16.11.0/24)"
This is making no sense to me, and it baffled the tech support rep I called at Sonic (and his supervisor for that matter). He basically kept saying that maybe it was something that AT&T has locked out in the gateway (Sonic is rebranding AT&T fiber in my area so the install and equipment actually came from AT&T). They have definitely locked out the 10.x.x.x range of private IP addresses which is kind of ridiculous. But, I digress.
Can someone please explain what might be the problem here? I'm already off the 196.x.x.x which was my primary goal, so if I have to live with what I have, so be it. But, I'd rather not if I can.

AT&T won't let you use the 10. range for their gateway (you could use it on your own third party router), they reserve that for themselves.

Being that I didn't want a potential conflict I went ahead and tried to change it again. HOWEVER, I'm getting a big red error message that says "Address must be on network (172.16.11.0/24)"

Here's the screenshot. Really doesn't say much more than what I said in the original post. But, maybe something else is sticking out at you. :-) 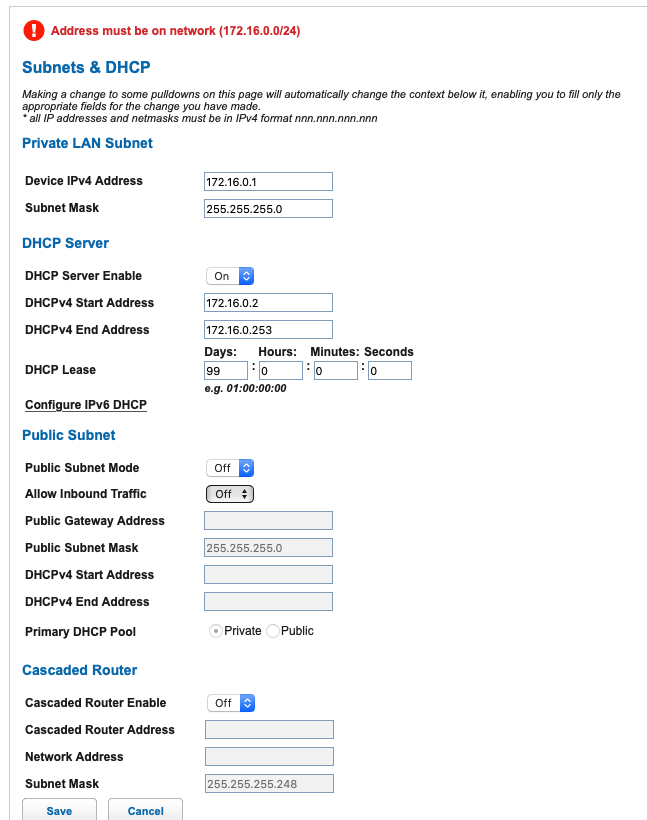 Yeah, you're right, not much help, huh.  Have you tried doing a factory reset (hold down reset button for >15 secs)?  We've seen all sorts of oddball things from the 320 that get cleared up by a full reset.

Of course you'll wipe out all config changes you've made and will have to re-enter those things.

@tonydi I haven't. But, the thought did cross my mind a day, or two, ago.

Maybe I'll try that on Monday or Tuesday, during the day, when nobody else is around the house that would be disrupted.

To be honest, I haven't made any other config changes other than the current subnet change (which turned out to be the publicly assigned one I mentioned).

I'll come back and post the results after I've had the chance to try it.