Pre-order the New Samsung Galaxy Z Flip4 & Galaxy Z Fold4 and, for a limited time, get twice the storage and a free case!
What is happening with 3G?
Learn more

Also: M-Cell AppStore app crashes on iPhone 6+ and iPhone 5 when attempting to login on mobiles. This issue has been present for 6+ months now. Any help in resolving this issue will be greatly appreciated. Thank you. 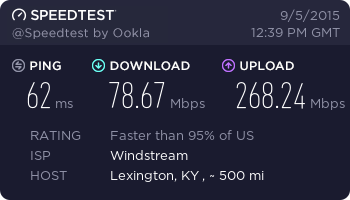 Your message is a little confusing. First of all the MicroCell App has been having trouble for some time. AT&T is aware of it but getting the developer to fix has not been a priority item. I'll bug the Admins again to see if there is any news.

Speed is basically irrelevant if you can maintain at least a 3.0Mbs download and a 512kbps upload. The trick is to have consistent speed and your line quality be good enough for reliable VoIP. Being able to access the internet without issues does not mean that your line is good enough for  AT&T's VoIP service.

We need to have a little more information about your setup as far as how you have the MicroCell connected. Windstream offers a VoIP service as well so do you have that in addition?

We have a basic set of questions which I've pasted below to help us troubleshoot. Please answer all of the questions.

Yes, the Mcell App is brain-dead at the moment.  I've tried it several times recently and it is not letting me log in and states:

You have not successfully authenticated."

Certainly not working as my login information works on the AT&T website.

That Speedtest has me confused.  Windstream is a DSL ISP, correct?  The fastest DSL speeds I've heard of are from CenturyLink in selected areas and that is only 40 Mbps on VDSL.

You show a download speed of 78.67 Mbps and what's more bizarre, an upload speed of 268.24 Mbps.  Maybe I'm missing something but this can't be correct.  I've never heard DSL running anywhere near that fast.

You need fiber optics to get that kind of bandwidth at home.  What is your subscribed bandwidth (down/up) from Windstream.

@ Otto - Didn't we have someone with Windstream in here before?

@Avedis53 - Yes, we did have someone from Windstream at one time. They had similar issues as well if memory serves me correctly (which is doesn't alyways) and they had difficulty working with Windstream. Given the response about the phone number booting other phones off indicates that support still has issues.

Yep. I'll check back later today to see if there is a response unless you check in before me.

The odds of that happening are pretty slim......

Yes. Whack *almost* covers it. I know I'm coming off as ignorant, and I am ignorant to this  subject a degree; as far as some of the settings and specifications go. Forgive me, I do apologize for my prior post being a bit confusing. I'm (obviously) new to the AT&T Community, as I am also somewhat new to the M-Cell. I basically just followed step-by-step instructions and referred to the user's manual when I first activated.

An  issue I've had from day 1 is that my location (home address) was not recognized during activation. AT&T had no idea why that was happening. (I still don't know), I opened GPS and dropped pin: not my address - this location was half a mile passed me.. but that wrong address ended up working so I left it alone. Other than that, I've never had an issue with the tower until I switched from Time Warner to Windstream (ugh, I live in a rural area, so those are my only two options for high-speed internet that I'm aware of. I left TW after almost 2 years of service due to the taxes, fees and surcharges that were boosting my monthly bill well above the advertised rate. I am now, reluctantly, a WS subscriber.

If I can address that "boot" issue again, Windstream's technician (not sure why I contacted them, I suppose because it seemed like a wifi problem at the time), but she asked me to turn off all of our mobile devices then power them back on, one by one. I powered mine on, then my son, all was okay until my husband powered his on. She said his device was the "problem" (I know, I dont get it either.) She stated that his device (iPhone 5) was causing maybe a glitch(?) and causing our wifi to drop, which caused the M-Cell to stall, and so on. (Again, this was a Windstream rep I'm trying to make sense of..) [kind of like you guys are trying to make sense of me right now] But. She ended up being right, I guess? We have no issues as long as he does not connect to our wifi. So much is wrong here, and it's clear I have no idea what it is.

On with clearing up my cluttered post - (Some of these I have NO IDEA what they mean, like I said when I first activated the M-Cell, I didn't have any major problems like I'm having now. That's why I'm ????? right now.

2. Do you have an active postpaid AT&T mobile account? YES

3. Is your MicroCell white or black? WHITE

4. Who is your ISP and is your service ADSL, cable, wireless or satellite? WINDSTREAM DSL

5. What are your suscribed download and upload speeds as stated by your ISP? 10mbps/?

6. Have you tested your internet speeds? (http://speedtest.net) YES 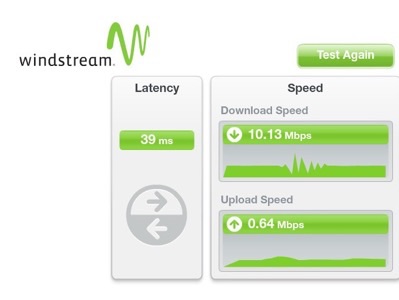 8. Have you tested your connection for VoIP? (http://voiptest.8x8.com) YES

9. Please run the test and post the results that are listed under the "Advanced" tab. 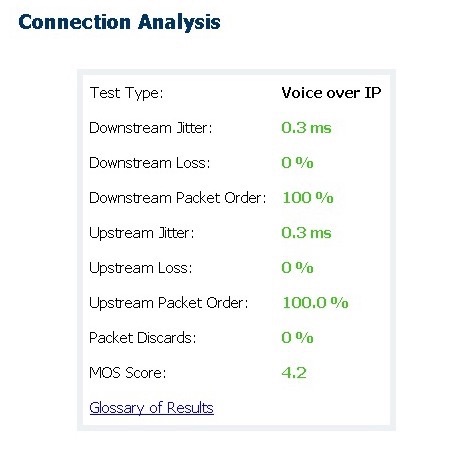 11. Are all of the cables firmly in place? YES

12. Do you have a combined modem/router (gateway) or a separate modem and router? COMBINED

What are the makes and model numbers for your equipment? LINKSYS AE1200

13. Have you met the minimum requirements for router settings as outlined in the Tech Guide? YES

14. What other equipment (access points, switches, computers, WiFi components, gaming consoles, etc.) do you have connected to your network? NONE

15. What does the light pattern look like on the MicroCell (power, ethernet, GPS, and 3G)? Are they all a solid green or is any of them blinking green or red, and if so, which one? ALL SOLID EXCEPT FOR COMPUTER

16. Have you done a hard reset of the MicroCell? See the Tech Guide for instructions. YES

17. Have you deactivated and reactivated your Mcell using AT&T's MicroCell website? YES

18. Does the ac adapter feel warmer than the top of the MicroCell where the vents are? NO

Sorry so long, my problem all boils down to the CONSTANT dropped calls and the aforementioned iPhone 5 interfering with the wifi connection. Hope I was clearer this time, apologies for the unnecessary rambling. Thanks.

No need to aplolgize. The MicroCell can be a bit daunting at times especially when the ISP gets involved.

Rural locations can be problematic because of the E911 GPS coordinates. It's most troublesome when you don't have a "regular" street address and only a route number or po box number. However, you wouldn't be able to register and activate because the GPS light would be blinking. It sounds like you've been able to activate, even with Windstream, so your location is fine.

First of all, WiFi has no effect on the MicroCell at all unless the MicroCell is sitting right next to the router, and then there may be some interference so Windstream has no clue at all. The MicroCell uses the 3G protocols for connectivity to your phone(s) which is a totally different frequency than WiFi.

Do all of your phones drop connectivity or is it just the last phone to turn on? Are all of you phones iPhones and have you reversed the order of turning on the phones to rule out the iPhone specificially?

If all of the lights on the MicroCell are a solid green (don't worry about the Computer Port because we don't recommend you use that), even when your phones drop connection, then you are connected to the AT&T Mobility servers.

When your connectivity is dropped, I'm assuming the M-Cell indicator on the iPhone disappears but the 3G light on the MicroCell is still a solid green.

Your speeds look fine as does your VoIP results, but you really need to run them at different times of the day to get a real picture of your line quality and not just a snapshot in time.

It almost sounds as if there is some sort of load balancing or something like that going on so when the last phone connects to your gateway (router/modem combo) preference is given to data over voice. It's not necessarily the phone but the way your gateway/ISP is handling the traffic.

You may want to try port forwarding. In other words, you configure the router to forward the 4 necessay ports to the MicroCell and assign a static ip address to the MicroCell so that the same ip address is reserved all of the time for the MicroCell. Unforutnately you'll have to get Windsream to help you with that because we can't. There are just too many gateways, routers, and modems, with different firmwares etc, to us or AT&T to keep track of.

I first was suspecting your ISP line quality as a potential cause of  your problem and it still may be but your VOIP test looks good.  Keep Otto's statement about running multiple tests in mind as a single test does not mean your connection is consistently good enough to maintain a connection.

Your Windstream speedtest is more what I expected for your DSL bandwidth than the first one you posted.  Your upload speed is marginal but unless it drops more during the day, it shouldn't be an issue.

I don't buy your ISP's reasoning concerning your iPhone "booting" other phones off your offline.  You have solid green lights on the Mcell so you do have a connection to the AT&T servers.

There are other questions here that need to be addressed.  First off, I still don't have a clear idea as to your network setup.  You state that you have a gateway (modem/router combined), yet you also state that you are using a Linksys AE 1200.  That is a USB WiFi adapter that plugs into a USB port on a computer so that it can communicate via WiFi to a gateway or router.

So, I need to know EXACTLY (make and model # please) what pieces of hardware are connected to your network and in what order.

Example of what I'm looking for:

Are you using the Linksys AE1200 to wirelessly connect a computer to your gateway or router?  The AE1200 can not be your router or gateway.  You state you have no devices connected to your network other than the Mcell.  Do you have a computer?    Please provide the information requested for further assistance.

Thanks Avedis for looking into the Linksys device. I'm having some difficulties today with Firefox and the AT&T Forum. Other forums are ok and Safari works just fine so it appears that Lithium and Firefox are not playing nicely today. Can't even pm

I agree that something is not quite right with the setup. Please be very specific with your setup.