After seeing all of the discussion around Marshmallow (and observing how spread out it is), I thought it would be a great idea to create a dedicated place for us as the mobility community team to share the information we have.

Anyone is welcome to join in the conversation; all I ask is (as a personal favor) we keep the conversation civil. We want to get you the information and updates as much as you want them. I think that's fair 🙂

Keep reading to see all news, updates, timelines, and anything else we have to share. This is a living post, so check back often!

Even if there are bugs in the marshmallow update it doesn't explain why we are 3 months behind on security updates, even the s6 active has a more up to date security patch than the s6. We are just stuck with an out of date and less secure os and it seems like we will be for a while. I know there is not much you can do Kevin but I do want to thank you for taking you're time to read and try and answer our questions and concerns.

Every customer makes a difference. For me, saying that isn’t some corporate feel good statement. It’s true. You just have to look at the person as an individual and not as part of a giant user base.

I understand the frustration as I’m right there with you with this whole thing. I really do appreciate you voicing that here.

I’m sorry to hear about your customer service experience; can you tell us more about it? Over at @ATTU-verseCare, I know they would want to hear your story. We can’t fix what we don’t know about.

If you don’t want to talk about it here, can you shoot them a message by clicking here?

Being honest, I don’t know if we will have an option to buy an unlocked device that can be updated from Samsung. That’s good feedback though, so I’ll pass it along.

I dealt with MANY people from AT&T and Bernie, a social media manager. I got called a liar by one of the reps and that was the final straw. I tried to explain to them once I decided to cancel my transition that they need to get it figured out why their system is telling them there is DSL service at my home. There is no, nor has there been, any DSL service in this home as long as I've lived here (10 years). I went nearly a week without internet, spent so many hours trying to fix an issue that I should NEVER have to deal with. I went above and beyond with my portion. Not to mention, being told multiple times by multiple managers the deal I was trying to get was not something they offered even though I had placed an order, had it cancelled and then placed another order while on the phone with one of the managers. Many times I was told "Oh yes, I will call you in an hour while the order processes" then I would never get an email.  I never got a single cancellation email either through the whole proccess. It was a nightmare, I've literally been scared off from ever trying to sign up for something from AT&T over the internet.

As for Marshmallow, Samsung released it to the carriers early Febuary. It's been three months since it was made official, Sprint, T-Mobile, Verizon, and U.S. Cellular all have it rolled out to MULTIPLE older Samsung phones (Heck, US Cellular has it on the Note 4 and S5!) The failed excuse of "We want to make sure it's fully tested for our users" isn't cutting it. When a "smaller" carrier like U.S. Cellular beats you to the punch? Yeah, something is wrong.

I'm getting to the point where it's not worth our discount to continue to have service with AT&T. Not only do I constantly have signal problems but paired with dragging their feet on updates and not enabling features (WiFi calling, why isn't it a thing with AT&T yet?!). While most of these things may seem minor, but when all of these things add up why should anyone pick AT&T?

I hope you don't think I'm saying this to be rude, I'm being completely honest in hopes maybe someone will listen. Other carriers have been pushing boundaries while it feels like AT&T is just coasting by. It's time to stop being complacent, get up and grab the cellular world by the horns and push those boundaries. That's what T-Mobile did and people joined them in droves.

I think it's great your willing to read comments, reach out and help. You should know any response I've seen from AT&T regarding this issue has been a generic and vague response. I know the forums are for users to help other users, and it's a godsend,... especially with users like Glimmer. These threads have been circulating around MM updates for some time now. It has been much more common for AT&T to delete comments from users rather than providing any assistance of their own. These deleted comments admittedly violate the TOS. However, after so much time I can only assume you or someone above you has seen this snowball and are now working on damage control. I've been with AT&T since my first phone (13 years ago), and I've stayed mostly because I've been grandfathered in with my unlimited data, but I don't understand why I have to sideload a stable MM OS and still be among the last groups of people to get it. I, like most, just want transparency. If it's AT&T apps causing the delay of MM on Samsung devices,... I think I stand with most people in saying, "We don't want your apps anyways." My contract ends next year. Whether I stay with AT&T or not will depend on how I feel the carrier treats me with their service. Now that I have sideloaded a stable of MM on my S6 edge, I guess I'll wait and see how AT&T handles the Android "N" update for my device.

I saw some forums which mentions that the MM update has added bloatware. Is there anyway I can stop the update being pushed through to MY DEVICE? I don't want the MM update.

@rabi347 wrote:
I saw some forums which mentions that the MM update has added bloatware. Is there anyway I can stop the update being pushed through to MY DEVICE? I don't want the MM update.

Nope after you tell it not to install 3 times it will force update.  There is no more bloat than you have now with the MM update.

You just need to wait for the update to be pushed to your your device.  They don't push the update to all the phones at once, or it will bog down the servers.  You should be getting it soon though.

OK, so I tried to update my M8 once again after wiping the partition cache as instructed by support. Update downloaded, unzipped and failed immediately when trying to install. Got a bootloader type screen that said E:find no match partition, and then installation aborted, cannot map file. Any ideas anyone?

Just saw this so maybe someone was actually listening @ ATT.

I was previously on a G4, but after 3 unsuccessful attempts for Attaching to fix my Bluetooth connectivity problems, and THREE warranty exchanges, ATT was forced to do a lemon law exchange and issue me a different model phone.

All the research I've done implie s the only way to solve the Bluetooth randomly turning off is with the 6.0.1 update.

Is anyone else complaining about this?

Update page says nothing about the Edge G925A, just the G920A getting Update.

I was told by an AT&T rep that there was NO timeframe even being discussed for the Samsung Galaxy Note 5. He could be wrong. I doubt it though. AT&T is a lousy company. I'm gonna hate going back to Verizon but I can't see a choice. Even their older phones are getting the latest Android updates.

How do you know this? Is this the Note 5 you're talking about?

I'd like to find someone I can trust on these types of issues.


How do you know this? Is this the Note 5 you're talking about?

I'd like to find someone I can trust on these types of issues.

you mean this update that Venom and myself have sideloaded? 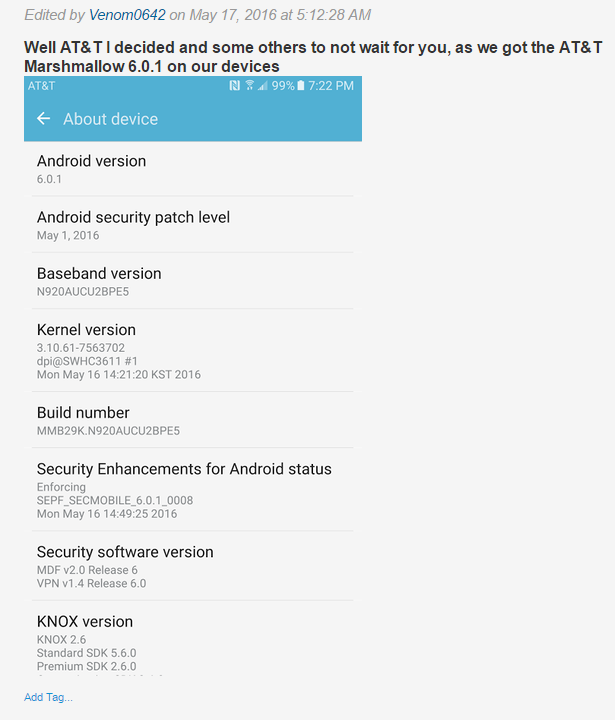 FWIW, I got the Marshmallow update to install on my m8.  I read on another forum that they had to clear their internal storage to 13 gb free (out of 32).

I managed to clear 10 gb free (out of 32) and then tried the update again, and it worked.  Not sure if it's the free space that did it, or the persistence (this was my 3rd try).