We Still Have Great Cyber Week Deals: Check out our $5 and under smartphone deals!
The best prices for our Military families
Learn more
Get the myAT&T app
Learn more
J

After the FCC settlement (which I never really saw a penny from), I knew the only thing tethering me to this plan is the previous idea that somehow it was the best plan AT&T had and that's why they discontinued it and tried to switch people off of it.

I think 5-7 years ago, that statement was true, but after looking at AT&T's current plans which are unlimited there is no comparison in features or price that makes sense to keep the grandfathered iPhone unlimited plan.

I write this simply to ease the fears that any other "holdouts" have about making the switch. Our AT&T bill went from $142.25/month to $112.5/month, and now my wife and I both have unlimited data, text, and voice, and have 40gb of hotspot! Holding onto a voice and data plan from 2012 is probably the most "boomer" thing I have done as a millennial, and I regret not making the switch earlier.

The biggest drawbacks with the grandfathered iPhone unlimited plan are as follows:

So lets do a bottom line comparison,

But it's much more than this, because we eliminated the following monthly "extras" that are now free.

Total Savings / month with the new plans after letting go of the grandfathered iPhone plan = $171.27!!!

Glad you finally figured it out. The forum regulars have been advising holdouts on that old plan to switch for years. One correction, though. ATT hasn’t throttled any unlimited plans since that FCC suit was filed. When you hit the 22GB threshold on that old plan or any threshold on any current or grandfathered unlimited plan, your data is reprioritized, not throttled. That means data might be slowed but only if network congestion requires it. Throttling is when data is slowed whether it needs to be or not.

Thanks for the clarification, I guess I thought it was "throttling" because the text message I received every month talked specifically about speed of service, I get the difference now. 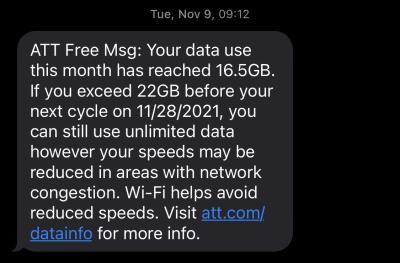 That is a great written account about upgrading from your previous grandfathered plan, @justadad!

Also, we've included Data usage support for managing & getting the most from your data plan. You will find helpful tips on how to avoid going over your 22GB data allowance in a single bill period.

The information in your detailed experience will be valuable to anyone considering making the switch. Thank you for your participation in our Community and Forums.

Enjoy the rest of your day!