5 years of flawless MicroCell service - now getting interference on calls?

We purchased an AT&T 3G microcell in September of 2010 because our new house was constructed of poured concrete - and it was impossible to get a signal of any kind when inside. The system has worked perfectly for nearly 6 years but for some reason we're now getting interference mid-call that is so bad that it's impossible to communicate with the other party and the call must be dropped. We're conducting business from our home so this level of performance is unnacceptable.

Please help us. Whenever we call support they have no idea how to support the Microcell.

My I suggest turning off enhanced LTE in the mobile data settings and see if it gets better for you?

Looking at your most recent VoIP results, the jitter and max TCP is still a problem as Avedis53 indicated. I use one line for the same reason that Avedis53 pointed out. 60 seconds is probably not a bad idea either because a longer time duration is more apt to pick up any problems during the testing phase.

My guess is that you have two issues.One is the LTE (HD Voice) that Glimmerman76 mentioned) and the other issue is your line quality. If keeping LTE disabled on your phones work, that's great because that's something you can control. If you still have sporadic issues after disabling LTE, then it's proably related to your line quality. In that case, there's nothing we or AT&T can do and you will have to work with Comcast on correcting that.

Thanks for the clarification. Hopefully disabling enhanced LTE will take care of the issue.

what phones are you using?

My wife and I have both been using Samsung Galaxy NOTE 4 phones for nearly two years. (It will be two years in October 2016). Initially, in order to get them to work with the MicroCell, we had to exchange the SIM card that came with the new phone for an older SIM card. As soon as we made that switch everything worked flawlessly - right up until this month.

Functionality-wise, there is no real difference between the white and the black MicroCell's, only newer hardware, a smaller footprint, and the loss of the Computer Port and the external antenna port.

What do you man by interference? Static, garbled voice, dropped call, etc?

Do any of the lights on the MicroCell flash when the interference occurs?

Did you recently update the Samsung phones?

If all of the lights on the MicroCell stay a solid green then just to be complete I'd check the ac adapter with a voltmeter. It should read 16VDC with no load. If it doesn't replace it with another adpater of the exact same rating and see if the problem goes away. If the adpater checks out, then the MicroCell, and your connection to AT&T appears to be fine. In that case you need to look at your setup (have you moved/changed anything prior to the interference), any changes with your ISP, and, as mentioned above, any chagnes to your phones.

Another way to rule out the MicroCell is to add another user under the Approved Users List who has an AT&T account and prefereably a different phone. If that phone doesn't have any issues that indicates your particular phones and/or OS that is the problem. We've seen countess issues with Android-based phones where they work and then don't work. My guess is that it's your phones because you had to swap the SIM card back in the beginning to even get the phones to work with the MicroCell. Glimmerman76 is our resident Android expert so maybe he has some ideas. If it is the phones, there will be very little that AT&T can do because Samsung/Google has been very reluctant to work with AT&T on any Android issues.

EDIT: I just saw Glimmerman76's response and that's a good start. Sometimes the "extra features" for whatever reason mess with the way the phone communicates with the MicroCell. If you have any AT&T-specific apps, you might want to disable them one by one and see if that helps as well.

The 'Enhanced LTE' setting has been changed (turned off) in both phones. Thanks for the suggestion.

[NOTE: We have not received any calls yet so we cannot veryify that changing the setting is a 'solution'. We will post aother reply when and if we have feedback].

Thanks for your detailed reply and helpful suggestions.

First of all, as suggested in your reply, we have taken the advice of Glimmerman76 and have turned off the 'Enhanced LTE' setting. [Unfortunately at this time we still have no feedback to report here since we have not received any calls that we could consider a true TEST of this proposed solution.]

Secondly, thanks for the information about differences between the white and black MicroCell hardware. Based on the information you provided it does not appear that our unit is obsolete or that we need to upgrade the hardware.

In response to your 'questions':

In response to your suggestions:

Thanks again. I will keep you up to date and will notify if and when a solution has been found.

Typically call quality is a function of how clean your line is for VoIP. If the provider has done something on their backend it's possible that your line is now not sufficient for VoIP. Your internet can be fine but VoIP is an entirely different matter. I would run a VoIP test (voiptest.8x8.com) and post your results here so we can have a look. It's best to run it at different times of the day to get an overall average or your line quality instead of a single snapshot in time. If it is a line quality issue, only your ISP can correct that because AT&T has no control over a competitor's lines.

The Android-specific update versions are not really helpful to us because they will vary for device, mfr, and carrier so we do not keep a "database" of OS versions that work or not. The Android OS is open source as I'm sure you are aware of, and that has many advantages over other OS's that are basically closed or very tightly locked. However, because there are over 12,000 devices that have various versions and flavors of the Android OS based on OEM, carrier, etc, issues are going to come up. One of the biggest issues we see with Android and the MicroCell is MMS/SMS, which works fine on some Samsung phones, and not at all on others. It's called device fragmentation and is very difficult, if not impossible, for the mfr and/or carrier to correct and keep current. There are no MicroCell updates or flashes that can correct specfific issues because not everyone has them.

The ac adapter suggestion is one that we quite often recommend because we have seen all kinds of squirrely issues when the adpaters start to fail. They are not the most robust adapters in the world (in fact they are quite cheap) and the MicroCell seems to be very finicky about it's power requirements.

Thanks for the additional feedback and suggestion(s).

I will order a new AC adapter today, (can't hurt), and will keep you all posted regarding our progress.

Best wishes and thanks.

Enhanced LTE is hdvoice and for some reason it made my microcell do just what you were talking about.  I also have a extra power supply since there cheap.


Thanks for the additional feedback and suggestion(s).

I will order a new AC adapter today, (can't hurt), and will keep you all posted regarding our progress.

Best wishes and thanks.

Make sure you order one with the exact same power requirements as the original. Or at least one that has a regulated 12VDC. A voltmeter is always a handy little tool to keep around

Now I'm going to humble myself and confess my technopeasant status with the following comments:

(1) I tried to utilize the 8x8, Inc. VOIP test webpage - and nothing happened. No results poulated no matter what variables I entered into each field. What am I doing wrong? How do I get this tool to work without calling 8x8 for support? [See Below] 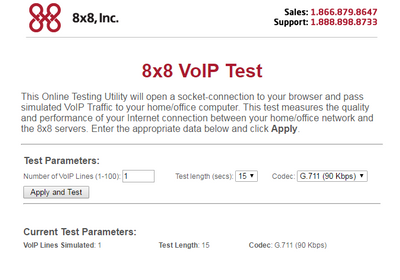 (2) I will unplug / inspect the original adapter for MFR / MODEL etc... but where do you recommend that I order/buy a replacement AC adaptor? (Amazon? or ???). Similarly there are probabably a thousand voltmeters available for purchase online. Can you recommend a simple, affordable make / model and where to purchase it? Sorry for the inconvenience but it will probably take two minutes for your to make a recommendation and that would save me ten hours of research. Thanks for your consideration.

Okay, since I've already embarrassed myself I'm going to go one step further and lay it onl the line.

Below is a photo of my current MicroCell AC adaptor:

According to some of the reviews the newer UpBright adapter made their MicroCell work even better. than it did before. Of course I could always buy one of each but that seems foolish. Do you have an opinion? Does it even matter? It's not about the money ... I just want to get it right and not have to deal with it again down the road.

Before you run off and buy another adapter or a voltmeter, I'd say based on what you posted, your ISP connection has degraded for some reason.  Robotic, garbled voice communications are due to voice packet loss or delay.  Minor packet loss or delay is mitigated by predictive insertion protocols in the hardware that try to fill small gaps in the packet flow with manufactured packets to counteract degradation of voice quality.  However, if the packet loss or delay is excessive, the predictive insertion protocols will fail and the voice quality will degrade to robotic or alien sounding voices and can end up dropping the call.

So, IMHO, the first thing to do is run the VOIP test throughout the day and generate several reports to see what is going on.  You posted that you can not run the 8v8 VOIP test.  This is due to a Java conflict with the browser you are using.

Please post which browser and operating system you are using when trying to run the VOIP test.

Your prognosis and explanation makes a lot of sense to me. I wouldn't be surprised if Comcast is the culprit afterall.

To answer your question, I brought up the voiptest.8x8com website on a 'Chrome' browser on my Samsung Series-9 ultrabook / laptop which operates on Windows 7.

Perhaps I should be using Internet Explorer or FireFox?

Also, what settings should I use when running these VOIP tests?

I greatly appreciate your assistance. I mean no disrespect to the other members who have been trying to help me but I would be very upset if I went to the expense and all the trouble to purchase accessories that have nothing to do with the problem.

Please advise at your earliest convenience and I will continue to move things forward.